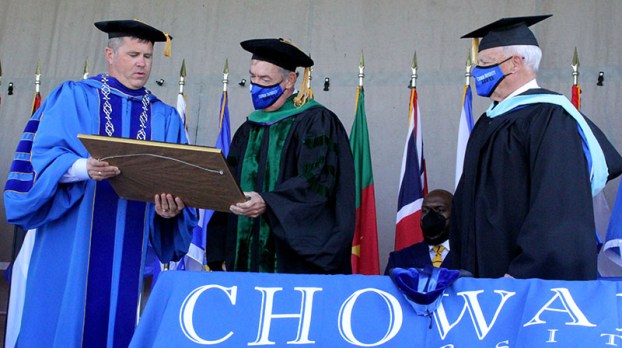 MURFREESBORO – Over the course of his adult life, Dr. Francis M. (Frank) Taylor has shunned the limelight, rather concentrating his focus on the health and well-being of others.

On May 8, the small town family physician was thrust into the spotlight upon being awarded an Honorary Doctorate of Humane Letters as part of Chowan University’s delayed in-person commencement for the Class of 2020. 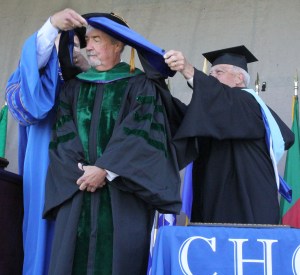 Dr. Kirk Peterson (left) is joined by Kemper W. Baker Jr. (right) in placing the Honorary Doctorate hood on Dr. Frank Taylor as part of the May 8 ceremony. Staff Photo by Cal Bryant

“This was very unexpected; it was a shock to learn that Chowan was honoring me in this fashion,” stated Dr. Taylor, who practices at Conway Family Physicians and, among other duties also serves as the Medical Director for the Northampton County Health Department.

“I am very humbled and appreciative to receive this esteem honor from a great university,” Dr. Taylor added.

Dr. Taylor’s commitment to Chowan University runs deep. “He has devoted countless hours to advancing the institution, first as the Team Physician and later as Director of Medical Services and Assistant Professor of Biology,” stated Chowan President Dr. Kirk Peterson at the May 8 commencement held outdoors at James G. Garrison Stadium.

Peterson added that the university’s administrative and athletic leaders praise Taylor as a “generous partner who has brought tremendous insight, strategic guidance, and boundless dedication to his roles at Chowan.”

Dr. Taylor’s tenure at Chowan began in 2005. He will complete his 16th year this summer.

He is not on Chowan’s payroll as Team Physician or as the Director of Medical Services.

“I do it for free, as a way to give back to the community,” Dr. Taylor said. “Chowan didn’t have anyone taking care of the physical exams of their student-athletes, so I volunteered. “I also handle the concussion protocol for those athletes.”

As a person that has been on the front lines battling COVID-19 since early last year, Dr. Taylor praised Chowan’s efforts to lower the risks of the virus spreading throughout the campus.

“What Chowan was able to do in handling the pandemic is remarkable,” he observed. “Yes, there were a few individuals that had COVID-19, but there were no severe cases and no one needed to be hospitalized.”

A 1985 graduate of North Carolina State University, Dr. Taylor earned a Bachelor of Science degree in zoology. In 1998, he earned his medical degree from the Brody School of Medicine at East Carolina University. There, he served as a North Carolina Rural Scholar and graduated with honors.

After completing an internship with the East Carolina Rural Family Practice Residency Program, he joined Conway Family Physicians. From there, he began a career in family medicine while serving his rural community in northeastern North Carolina and southeastern Virginia in various public health positions. They include, but are not limited to, Medical Director of the Hertford-Gates Health Department, Courtland Health Care Center, Martin-Tyrrell-Washington Health Department, Northside Psychiatric Hospital, Regency Health Care, and Waverly Healthcare and Rehabilitation; a Hospitalist at Roanoke-Chowan Hospital and Southampton Memorial Hospital; Chair of the Primary Care Department at Roanoke-Chowan Hospital; Emergency Room Physician at Our Community Hospital; and Physician at Perdue Farms and Narricot Industries.

A board-certified member of the American Academy of Family Practice, he has received numerous awards and accolades for his work with rural patients, especially the elderly and hospice-care patients, including the Garland Award for Excellence in Geriatrics and the Pfizer Award for Family Practice.

“These accolades and accomplishments speak volumes about Dr. Taylor’s skill and service to our community,” Dr. Peterson observed. “Anyone who has been a patient or a friend knows that he is a man of integrity.

“He has saved lives,” Peterson added. “He has had patients who have paid him with bushels of corn; he has patients that he has treated for free. He is a physician who truly cares for his patients, this university, and our local communities.

“In a time when so many doctors chase big paychecks in larger areas, Dr. Taylor planted his roots firmly in rural North Carolina and we are better and healthier for it,” Dr. Peterson concluded.

AHOSKIE – The Town of Ahoskie formally welcomed its new Chief of Police here Monday morning during a swearing in... read more