A graveside memorial service will be conducted at 11 a.m. on Monday, April 12, 2021 in Pinewood Memorial Park, Greenville, NC. 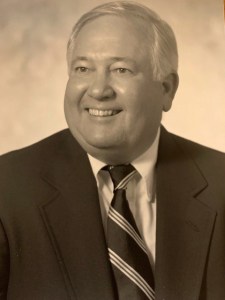 Born in Pitt County to James Murray and Juanita Sermons Sullivan on August 23, 1941, Roger grew up in Ahoskie, NC and was a graduate of Ahoskie High School and Campbell University. He began his work career coaching high school sports in Madison, VA, but later was employed as an insurance executive with Sealand Containerized Cargo, heading up their workman’s compensation division as director, first on the east coast and later on the west coast.  After more than 27 years at Sealand, Roger retired to Ormond by the Sea, Florida, living overlooking the sea that he loved and enjoying his passion of playing golf with friends, living there for over 20 years until his health began to decline a few years ago.

Roger cherished his family and his life-long friendships, and was a doting and generous uncle to his niece and nephews. He was an avid sports fan and faithfully followed his beloved ACC teams regardless of where in the country he was living.

In addition to his parents, Roger was preceded in death by a brother, James G. Sullivan and a nephew, Kevin Allen Sullivan.

The family will receive friends following the service at the cemetery.