Bright ranks “best of the best”

AHOSKIE – Roanoke-Chowan Publications unveils its 2021 Calendar, and a Gates County schoolteacher’s photo of a sunset over Lake Gaston has landed on the cover as well as earning her $250.

The calendar, a now annual publication by this newspaper, is full of photos that depict life across the Roanoke-Chowan area. Those photos were solicited from September through the end of October with the cash grand prize awarded to the photographer whose work was chosen for the calendar’s cover. 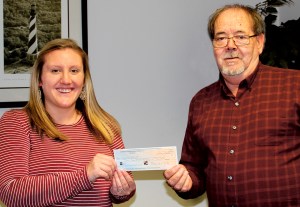 That honor was earned by Lauren Bright of Sunbury, a fifth-grade math teacher at Buckland Elementary School. The award-winning photo was of her father, David Swink, and her son, Carter Lee Bright, as they relaxed on a boat this past summer while enjoying the view of a setting sun over the lake.

Bright’s work also landed her two other photos inside the calendar: a snow scene in January and her son playing in a mud puddle (April).

Other local photographers whose work was published inside the calendar were Lauren Harrell of Ahoskie (February; a cardinal on a tree branch ), David Spruill of Gatesville (March; an owl perched in a tree), Grace Woodard of Murfreesboro (May; flowers and plants blooming at Chowan University), Courtney Jones of Eure (June; softball game), Maegan Watson of Gates (July; her daughter smelling a sunflower), Sarah Matthews of Aulander (August; her daughter preparing for a school day), Jonathan Jones of Eure (September; Merchants Millpond State Park), Kayla Pope of Aulander (October; her child sitting among pumpkins), Brandy Tinkham of Colerain (November; her child on a toy tractor), and Beth Jones of Askewville (December); her child decorating a Christmas tree).

There were a total of 97 photos submitted; all were judged by the staff of Roanoke-Chowan Publications.

Additional copies of the calendar are available at the Roanoke-Chowan News-Herald office located at the intersection of Main Street and Catherine Creek Road in downtown Ahoskie.