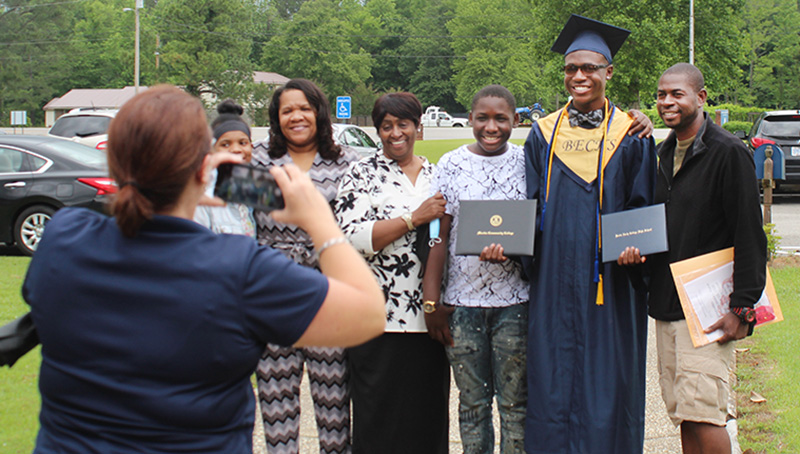 Joined by several members of his family, Ke’Von Lee (second from right) poses for a photo following his graduation on May 29 from Bertie Early College High School. Photo by Gene Motley

WINDSOR – It was Pomp and Circumstances complete with tasseled cap, gown, and mask.

Let’s face it: there’s really been no way to pandemic-proof the Class of 2020’s graduation.

Ceremonies around the country may have been canceled, postponed, or even gone virtual, but the spirit of Graduation Day for one local early college high school was still very much alive and well.

Teachers and staff at Bertie Early College High School near Windsor did their best to make this a memorable time for their seniors. From a giant sign on the front lawn of the school displaying each honorees’ photograph, to the pictures and balloons, plus the signs and streamers necessary for that treasured and memorable moment. BECHS held a graduation to remember on Friday, May 29, and it was all endorsed by the kids themselves.

“I got the idea from my pastor (Dr. Akeem Walker, First Baptist Powellsville) who has been conducting drive-in church, so I took the idea back to my staff of holding drive-in graduation, and everybody caught onto it,” said Early College principal Wanda Cofield. “It was something new, different, and they liked it.” 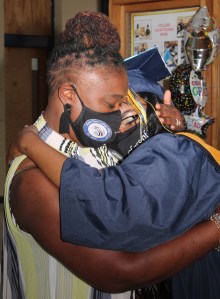 “I didn’t want to do just virtual, and I didn’t want to just hand out a diploma. They earned so much more so I wanted to give them everything they could get,” she stated.

Cofield revealed that what ended up taking place was actually the ‘alternative’ plan: graduation by appointment. An earlier idea called for all 37 graduates to participate in a 6 p.m. parking-lot ‘drive-thru’ ceremony at nearby Bertie Middle School.

“They were to parade in by vehicle to a specific spot, six-feet apart with no more than 25 gathered at a time, walk across the stage and receive their diplomas. Then once they returned to their cars the rest of the class would follow doing the same in keeping with CDC (Center for Disease Control) guidelines,” she explained. “Then, all together they would turn their tassels.”

There was also one additional caveat: “No speakers at the ceremony as we wanted to keep it short and sweet,” she added.

Despite those ‘best-laid plans’, Mother Nature did not cooperate as rain was forecast for that evening, so the school switched to ‘Plan-B’, all of which was suggested by the graduating students themselves. Despite the dreary day outside, the staff did everything to make the occasion festive.

“Lights, banners, everything,” Cofield admitted. “Everybody put it together, a team working together, and this makes the Class of 2020 unstoppable.”

With the indoor ceremony, the school gave students a chance to have five members of their family and/or friends in attendance, which is the usual graduation average. They were also able to do it in front of a blue diorama background screen, to simulate a stage and what their real graduation would have looked like.

“I really can’t take any credit for it,” said Bertie County Schools Superintendent Dr. Otis Smallwood, who was on hand as all 37 high school graduates received their ultimate certificate of achievement. “We had many meetings throughout the year to make sure we stayed within compliance of the Governor’s Executive Order and the guidelines of the Department of Health and Human Resources. I think this way makes it a little more personalized.”

Smallwood noted that all five members of the county’s Board of Education attended some part of the ceremony at some point in the day. He said the Early College had previously made a proposal to move the ceremony to a Sunday date, but the graduates voted that one down. Another idea was for the grads to just come to the school randomly and pick up their diplomas.

“The parents especially, and the kids too, wanted something more formal,” Smallwood noted. “But in the end I think they wanted to just get it done and over with. Plus, they don’t have to sit through a boring speech.”

Beginning at 10 a.m., and lasting until nearly 4 p.m., each individual student arrived – resplendent in cap and gown – with family and friends in tow. They then walked from the lobby down the hall one final time to a classroom staging area where their guests were seated, Ceremoniously, the principal then read out their names as high school graduates, presented each their credential, and requested they turn their tassels. The finale was a departure ‘march’ out to the strains of ‘Pomp and Circumstances’ played on a portable speaker system. Before departing those hallowed walls for the final time, the by now ex-students had a chance to cap the day with a photo memory.

Several grads earned not only their high school diploma, but also an Associate of Arts degree from nearby Martin Community College.

“I liked it,” said graduate and Windsor native Tamyra Ryan. “It was quick and easy, and I can tell my children that I had a truly unique graduation. Having no prom was tough but we made it through quarantine, and I hope the Class of 2021 doesn’t have a graduation like this.”

Graduate Alyssa Roussis was born in the fall of 2001 during the 9-11 terrorist attacks, and now she’s graduating during the 2020 COVID-19 pandemic.

“(Graduation) was different but it was still fun,” Roussis confessed as she sat packed together with loved ones departing campus in the family van. “It was disappointing not to have a traditional ceremony, but it’s something different that I will remember for the rest of my life.”

“It’s sad that it had to be like this,” admitted Windsor grad Samya Speller. “But we got through it. I’ll be able to tell them in the future that we had one, and we made it fun.”

“Our Plan B ended up being God’s Plan A all along,” the principal said.

For Cofield, the ceremony also had a bittersweet moment.

“This class is extra special to me because they were my first true class of freshmen under my leadership as principal,” she said as she leaves this post to next year become Director of Career Technical Education at the BCS Central Office complex on Highway-13 for the 2020-21 school term. “At times they were my group study, or experiment, as I was learning to be a true principal and they looked to me for leadership. As they graduate and move on, so too will I.”