MURFREESBORO – Joey Parker left this world Monday, December 16, 2019 the same way he lived most of his life, smiling ear to ear. He was surrounded by family who loved him more than words could express at Rich Square Health and Rehab Center.

He was born Joseph Clyde Parker on June 6, 1959 to Joseph Leonard Parker, Jr. and Jeannette Vinson Parker of Murfreesboro, N.C. He lived his life hard and fast, always seeking out good times with great people. Every time you were in his orbit, you’d hear great stories of all his adventures, including his children from outer space. Joey had an energy that was contagious and could make you smile even when you wanted to choke him. It went without saying that he loved his family deeply and found his second wind in his great nephews and niece in his later years. 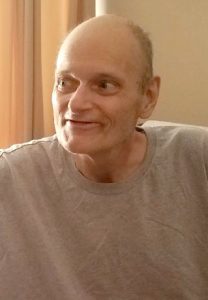 Joey was the best truck driver on the east coast, which was destined to be from childhood when he terrorized the neighborhood with his cousins and brothers on his bicycle. His family is at ease knowing he has gone on to be with his daddy, his baby sister Jennifer, Granddaddy and Grandma Parker, Pop and Pun Vinson; aunts and uncles Larry, Sis, Billy, and Lester; and great aunt Gen. Those who knew him best will always remember him with his yellow Tonka truck, haulin’ gravel around the yard. The circle will be unbroken, as he lives on in our hearts… Keep on truckin’ Joey…

In lieu of flowers the family feels Joey would like for donations to be made for his great-nephew’s needs by mailing to Henry Parker Hodges 115 Jay Trail, Murfreesboro, NC 27855.

A Memorial Service was held Saturday, December 21, 2019 at 2 p.m. at the Meherrin Baptist Church in Murfreesboro, NC.  Bridgers Funeral Home, Inc. in Conway is in charge of arrangements and online condolences can be shared with the family at www.bridgersfuneralhome.com.