MURFREESBORO – The second suspect in an October armed robbery in Murfreesboro has been apprehended.

Sherwin Tann, 23, of Murfreesboro was identified as the second individual who escaped after a robbery which occurred at 158 Sweeps Internet Café on Oct. 10. He was arrested by police in Jefferson County, New York on Nov. 18.

According to a news article from WWNY 7News, state police stopped a vehicle in the town of Pamelia, and Tann fled the scene. The officers gave pursuit through the woods and a swamp before he was apprehended with search assistance from a K9, a drone, and a helicopter. Tann was taken to the Jefferson County Jail without bail. 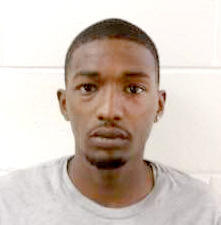 “I’m glad we’ve got him in custody,” said Murfreesboro Police Chief David Griffith, speaking to the News Herald on Thursday. “It was a team effort with other jurisdictions.”

Griffith reported that the suspect would soon be extradited back to North Carolina to face charges from the October robbery.

Tann stands charged with several of the same felony charges as the first suspect, Kvon Lassiter, who was arrested shortly after the robbery on Oct. 10.