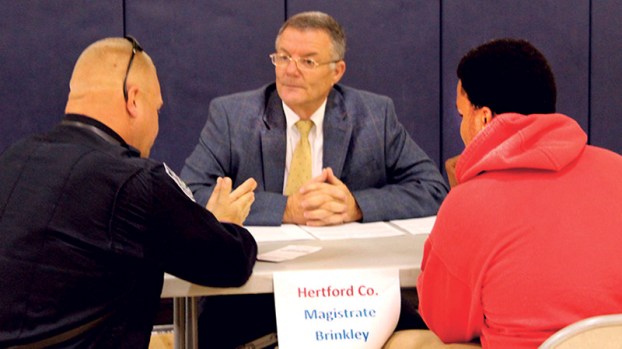 Hertford County Magistrate Doug Brinkley (center) listens as a local police officer explains the details of an arrest made on a driver who took part in Tuesday’s mock event held at R-C Community College. Staff Photo by Holly Taylor

That’s what the police officer said to the student before escorting him to the magistrate to be charged with driving under the influence. But the student soon learned that was just the first step in the whole legal process.

Fortunately, this situation was only a teaching demonstration set up to show students more about the consequences of distracted driving and driving under the influence. Roanoke Chowan Community College hosted the Arrive Alive Tour on Tuesday, Oct. 29 and partnered with local law enforcement officers, magistrates, bail bondsmen, and the District Attorney’s office for the mock event. 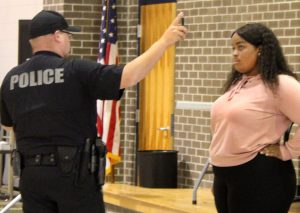 High school students from all over the Roanoke-Chowan area came to experience the process from start to finish, from using a simulator to understand what it’s like driving under the influence to sitting through a trial at district court.

Warnings against driving while impaired or distracted often focus on the danger of bodily harm that comes from getting into a car accident. But Saxby said students usually aren’t as familiar with the legal consequences that follow, such as having your license revoked or spending time in jail, when someone is caught and charged with those crimes.

“I’ve actually charged a few and took them to the magistrates,” said Ahoskie Chief Troy Fitzhugh during a momentary break from the action.

“It’s set up to actually divert them from being involved with drinking and driving or impairing substances,” he continued. “I believe the students are learning, and I hope it will deter them. I believe that’s what’s needed in our communities.”

The first stop after arrest was a visit to a magistrate who listens to the police officer’s testimony and charges the student if they find probable cause. In some cases, they may even revoke a person’s license. 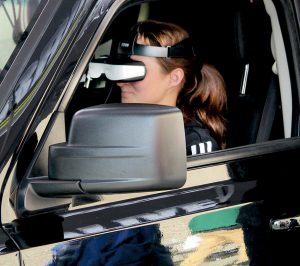 A student from Ridgecroft School sits in the simulator which portrays the effects of impaired driving. Staff Photo by Holly Taylor

“We’re glad to be here participating in this. We think this is an excellent program,” said local magistrate Doug Brinkley. “They don’t realize what it costs.”

Fellow magistrate Deborah Morrison echoed similar thoughts, adding, “they don’t know what to do when they encounter an officer or if they’re charged. It’s a scary process.”

The magistrates also place participants under a bond depending on factors including length of residency, record of appearing in court, or their danger to society. Once that’s done, the students have to wait in jail before they see if they can make bond.

While waiting in the “holding cell,” Ridgecroft student Blake Birdsong said he thought the event was helpful.

“It’s a pretty accurate simulator because you’re going to get the same charges in real life as you do here. So it’ll give you a good lesson on what not to do and what to do,” he explained. “I think it’ll have a positive influence on anyone.”

Bail bondsman Lee Brooks had a stack of papers waiting for students to fill out, explaining to each one what their options were. He too said he thought it was a great experience for the teens to learn more about.

The final part of the event was a mock trail hosted by District Attorney Valerie Asbell along with her Assistant District Attorneys and Victim Assistants. Students were “tried” for the offenses they committed while driving in the simulator so they would know what to expect in court. Asbell also provided them with statistics about the amount of people who are injured or die as a result of someone choosing to drive distracted or impaired.

“As District Attorney and a public servant, I believe it is my job to educate the public about the effects of crime on the person committing the crime and the victims of crime,” Asbell said. “That is especially important when it comes to our young people and alcohol and drugs.”

“I hope that this experience will ground students and let them see that their choices determine consequences,” she continued. “During my 26 years as a prosecutor in this district, I have seen first-hand the devastating effects of people who drive while impaired by any type of substance.”

Asbell said she’s taken a hard-line stance that impaired driving is no accident, and is determined to protect the public by holding people accountable for their actions.

The Arrive Alive event was sponsored by the community college’s Student Government Association. Saxby expressed her thanks to the local agencies who came out to help spread awareness to over 150 high school students who participated.