WINDSOR – I’m not into Game of Thrones, but I do know it has a lot of ‘kings’.

Friday night at Roy Bond Stadium, Bertie High had just one king. And after the performance he put on, he was worthy of a throne.

Isaiah Williams ran for three touchdowns and passed for three more as the Falcons finally got into the win column with a 52-18 rout of Northeastern Coastal Conference rival, Pasquotank.

“I almost forgot how this feels,” joked Bertie head coach Grantley Mizelle. “We executed tonight and it paid off.”

Through the air, Williams was 9-for-16 for 193 yards and churning his legs, he ground out another 76 yards and three touchdowns on nine carries.

And his schoolmates also voted him the Homecoming King. 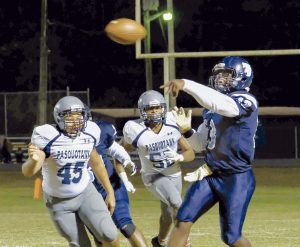 Bertie High School quarterback Isaiah Williams had a pair of honors last Friday night. He was voted as Homecoming King, then went out and ran for three touchdowns and threw another three more in a 52-18 rout of Pasquotank. A.A. Imaging / Andre Alfred

Bertie drove 52 yards in six plays for their first score, and eight-yard run for Williams’ first touchdown. They then recovered an onside kick and this time took six more plays before Williams found Juavonta Outlaw for the night’s second score. The Homecoming crowd was howling as the scoreboard read 12-0, Falcons.

After a score by the Panthers, the first quarter ended with that same score. In the second stanza, Bertie had a longer clock-devouring drive where they picked up five first downs before Williams dragged defenders draped over him like fur pelts into the end zone for his third touchdown and an 18-6 tally. That was also the score at halftime.

“Isaiah finally stepped up tonight and showed why he and (Hertford County’s Tye) Saxby are the two best in this league,” added Mizelle.

Another recovery of a kickoff fumble by Bertie set them up at the Panthers 40, and on the second play, Williams hit Jerome Gaynor, who beat the lone Pasquotank safety in coverage and sprinted 40 yards for Bertie’s fourth score. This time the conversion succeeded and the lead became 26-6.

The Falcons’ next possession took just three plays through a porous Panthers defense: Williams hooking up with Gaynor again. Add another two-point conversion and it’s 34-6.

Pasquotank got another touchdown at the end of the third, and another near the end of the fourth, but sandwiched in between was Williams’ sixth scoring play and two more late Falcon touchdowns.

Statistics-wise, Gaynor only had two catches, but both were scoring grabs. Marcus Jenkins topped the century-mark on the ground with 148 rushing yards and a touchdown. Finally, Williams’ 76 rushing yards gave him a total of 296 for the evening.

Fans may not have liked the ‘Game of Thrones’ TV ending, but no one at Bertie could argue who was the ‘real’ king on Homecoming night…with or without a throne, a crown, or a scepter.