Lance Jenkins (seated, right) signs a copy of his first-ever book - A New Requiem – last week at the Northampton County Visitors Center. The book signing event attracted many of his friends, to include, from left, Charles Slade, Joella Brown, Anna Burgwyn, and Pam Slade. Staff Photo by Holly Taylor

JACKSON – It’s not every day that people line up to get someone’s signature. But when a Northampton native returns to his hometown as a newly published author, that gets some attention.

Lance Jenkins, who grew up in Jackson, was at the Northampton County Visitor’s Center on Thursday, Aug. 8 for a book signing to celebrate the release of his first book “A New Requiem.” He spent the evening signing books, snapping a few photos, and catching up with old friends and neighbors.

Pat Bennett, who was Jenkins’ high school English teacher at Northeast Academy, was one of the people who came to the event.

She said she was thrilled when she learned he’d published a book, adding that she was looking forward to reading her copy as soon as she returned home that evening.

“People have said it was a page-turner,” Jenkins said about the feedback he’d received so far. “It’s a work of literary fiction, but it has elements of drama, romance, suspense, crime thriller. It’s got a little bit of all of it.” 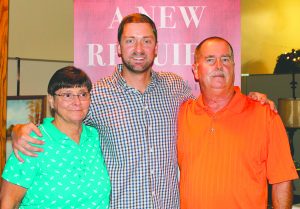 The new author (center) is shown here with his parents, Tammy and Andy Jenkins. Staff Photo by Holly Taylor

The book, he explained without giving too much away, follows the story of a murder in a small fictional North Carolina town and the gay man who is wrongfully accused of the crime.

“The reader knows early on that he’s innocent, but the town turns against him because of who he is and how starkly he contrasts with the people around him,” Jenkins said.

“The message really is for us to be empathetic and understanding towards things different than what we’re used to,” he continued. “I think that’s a message that’s pertinent to everybody, that we ought to consider how we treat folks, and perhaps we’ll all get along a little better if we do.”

Jenkins first started writing his book in 2015, but struggled with it and took a break for a while. But he picked it up again in 2017 and managed to complete the entire story in about seven months, writing in the evenings after working his full-time job at Farm Bureau.

“At that point, it wasn’t just trying to achieve the goal of writing a book. I had a story in mind, and that was key,” he said.

Jenkins also noted the main character in the story is based on his friend, Dwight Berry, who lived in Roanoke Rapids but has since passed away. The story within his book is completely fictional, Jenkins emphasized, but he chose to use Berry to build the character because “he was such a likeable person in real life and he was a stark contrast from the community around him.”

Jenkins said he’s had a great experience so far since releasing the book and holding signing events like the one sponsored by the Northampton County Chamber of Commerce held at the Visitor’s Center in Jackson. He was excited by the turnout for the event and hopes more people continue to enjoy the book.

For more information about the book, visit www.blancejenkins.com

AHOSKIE – The best way to build a community is to know your neighbors. That’s been the idea behind National... read more