The gift of life

CONWAY – What began as a way to help one friend ended up as a way to assist a complete stranger.

Back in 2014, Joseph Brown, along with several of his former classmates at Northeast Academy, signed up to join the “Be the Match Registry” which connects cancer patients with donors who can provide life-saving peripheral blood stem cells (PBSC) or bone marrow. At the time, Brown joined to see if he was a match with his friend Caleb Topping who had been diagnosed with leukemia.

“None of us were a match for Caleb,” he recalled, though Topping did eventually match with someone who helped prolong his life. 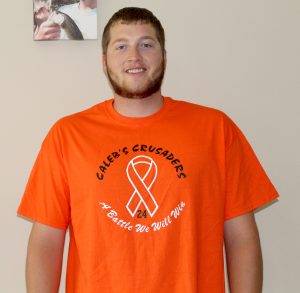 On Wednesday, Joseph Brown of Conway will undergo a peripheral blood stem cells procedure that will be used to help save the life of an unidentified recipient. Staff Photo by Holly Taylor

Topping unfortunately lost his battle with cancer in 2016, but Brown’s name and information remained in the registry, and now on Wednesday, July 17 (today), Brown will undergo a PBSC donation procedure to help out someone he’s never even met.

The two matched initially in 2017, but Brown said the patient wasn’t able to receive a donation at the time. He doesn’t even know the name of the recipient, but that didn’t deter him from trying to help a person in need.

Brown’s procedure will last about six to eight hours, but it’s as simple as sitting down to give blood. Be the Match coordinates all the technical details, covers all costs, and makes sure he is ready beforehand.

“It’s kind of like if you’re giving doubles for blood,” he said, explaining how a machine will separate out the necessary parts of his blood and then the rest will be returned to his body.

Once the procedure is completed, Brown said, “I think for a year they’ll keep me just for this patient in case he needs something else, then after that they’ll put me back on the list.”

Like the donation process itself, he recalled that signing up for the registry was very simple too. All he had to do was send in a cheek swab sample, and then wait.

According to Be the Match’s website, people can join the registry online (a kit will be mailed out) or through a donor registry drive. They especially encourage people between the ages of 18 and 44 for sign up because research has shown that cells from younger donors are more successful in transplants. Matches are more likely for people who share the same ethnic background, so the organization especially encourages more African Americans, Native Americans, Asians, Latinos, and multiracial people to sign up.

About 1 in 430 people in the registry go on to donate.

“I hope people sign up. It’s not hard,” Brown encouraged.

He emphasized that he isn’t doing the donation for any sort of attention or recognition.

“I know when Caleb was diagnosed, I’d do anything to ease his pain or just take it all away. He was like my brother. I would easily trade spots with him if I could, but I can’t,” he said. “People who have cancer go through tons of stress and everything. If I can just take a couple shots and give some blood to somebody and possibly save their life, what’s a better gift than that?”

“I know somebody helped my buddy out. If I can possibly help somebody and save their life, I’m game for it. It’s the least I can do,” he concluded.

For more information about joining the registry and the donation process, visit bethematch.org