Forty-five years ago, a handful of ladies gathered together to try to do some good in their community. That’s how the local Kappa Iota Omega chapter of Alpha Kappa Alpha (AKA) was formed. 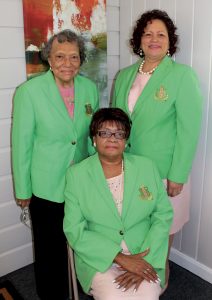 The organization, which now covers Northampton and Halifax counties, will celebrate its 45th anniversary on Saturday, June 22, just a week shy of their official anniversary date.

“We just missed our days of being a service to mankind,” explained Carol Williams, one of the chapter’s charter members who is still active in the group today. “We wanted to know what we had to do to charter a chapter.”

Williams first joined the service-oriented sorority when she was a student at Winston Salem State University. When she returned back home to teach school at Aurelian Springs in Halifax County, she talked to fellow AKA members which included Angelus Bracey Wells and Shirley Baugham. The three of them along with other area members of the sorority decided they wanted to create a local chapter to continue serving the community.

“When you like to be around a certain group of people, you get comfortable with them,” explained Wells, who first joined AKA when she attended Fayetteville State University.

Baugham in particular was instrumental in learning what they had to do to get charter approval, writing to the sorority’s regional director about their idea. Williams said of Baugham, “she had a dream. She had a vision that we could be of service in this area.”

They called themselves the “Pink and Green Socialites” at first, Williams recalled, until they got charter approval and became Kappa Iota Omega on June 29, 1974.

“When we started out, there were 17 of us,” she continued, noting some of those people have passed on, become non-active in the organization, or moved away from the area.

Williams and Wells are the only two charter members still active in the local chapter.

Originally, the chapter covered Northampton, Halifax, Hertford, and Bertie counties. But the group split off in 1983 with Hertford and Bertie members forming their own chapter.

But no matter how many counties were covered, the group has continued their service-oriented focus throughout their 45 years of existence.

Williams cited the Tea Rose Ball as one example. The annual event was created to help raise scholarship money for young graduates. The formal affair was discontinued in 2000, however, because there were a number of other service projects being undertaken by the sorority.

Over the years, the Kappa Iota Omega chapter has participated in Relay for Life, adopted a highway to keep clean, made donations to domestic violence shelters, worked with Department of Social Services to provide Christmas presents to children, and much more.

In addition to local service projects, they also participate in nationwide and international projects conducted by chapters all across the country. Recently, for example, they collected shoes and eyeglasses to send to Africa.

Though all the original charter members were dedicated to the work when they first began, Williams said, “we decided we needed to grow. Seventeen [people] just wasn’t enough.”

Dorothy Jordan was one of the first people who joined up when the chapter started accepting new members.

“I had relatives that were in the sorority,” Jordan explained, noting she hadn’t joined while she attended Winston Salem State University, but was interested in the opportunity when she returned home to teach school in Seaboard.

Both Jordan and Williams explained that many people who join AKA are following in the footsteps of their grandmothers or mothers. But that’s by no means a requirement to join since the organization is open to all women.

With many years in the sorority under their belts, Jordan and Williams reminisced about different events they’ve taken part in, like the biennial Debutante Ball which the chapter began holding in 1976. Similar to the Tea Rose Ball, this formal event encourages high school juniors and seniors to raise funds for college scholarships.

“We expose them to a lot of educational activities,” Jordan explained. “We try to get it to be a learning process, not just fun.”

Jordan also recalled one time when she had to step in last minute as chairperson for that year’s Debutante Ball, determined to make sure the event still happened. She emphasized how helpful the event was for young girls about to head off to college.

“It was really successful when it came to financing [tuition] because at that time you didn’t have all these grants and loans like you do now,” she said. “It was really a necessity if you wanted to go to college.”

Encouraging education is a big focus of the organization’s efforts. The chapter has developed mentorship programs for younger people—Budding Roses for girls ages 5-15 and AKA Gents for young boys of the same age.

“We try to mentor them on how to be a service to mankind,” Williams explained. “We have them participate in our activities. Whatever we do, they do.”

One of the biggest things they all said they’ve seen change over the years is the amount of service work they do, which has only increased as time goes on.

“We did a lot of things, but not as much as this,” said Wells about the local and national projects they focus on. “You have to be dedicated.”

“To do service, you give up yourself,” Jordan agreed.

“We all work under one goal,” Williams added.

“These ladies are valuable assets to this chapter,” Jerman said. “We’re grateful that they did have the tenacity and the ingenuity so we can continue.”

Wells summed it up best, however, by saying “we’re going to take it one day at a time, and do what we can to provide service to all. It’s a lot of work, but when you think about it, it’s worth it.”

Alpha Kappa Alpha is an international service organization founded in 1908 on the campus of Howard University in Washington, DC. It is the oldest Greek-lettered organization established by African-American, college-educated women.

AKA is comprised of nearly 300,000 members in 1,024 graduate and undergraduate chapters in the United States, Liberia, the Bahamas, the US Virgin Islands, Germany, South Korea, Bermuda, Japan, Canada, South Africa, and the United Arab Emirates.