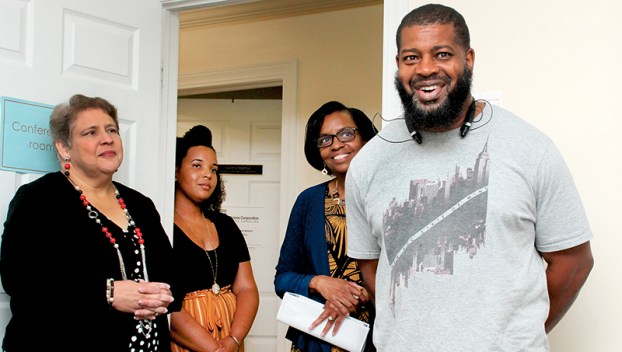 Michael Hill, a local barber, shares his story about the help the Telamon Corporation provided to get him started in business. Listening, from left, are Telamon (Ahoskie office) employees Roxana White, Charity Davenport, and Aleta Tootle. Staff Photo by Cal Bryant

AHOSKIE – You are down on your luck and in need of a hand-up, not a hand-out. While there are many avenues to take locally when choosing the organization that best fits your needs, one in particular has been at the forefront since 1965.

During his visit to Ahoskie on Tuesday, First District U.S. Congressman G.K. Butterfield learned first-hand of how the Telamon Corporation provides valuable resources for local citizens. He listened intently to an overview of Telamon’s various offerings; heard a success story from one of its many clients; and promised to do all he could within the political arena in Washington, DC to keep federal dollars flowing into these much-needed services.

“I will continue to fight for you,” said Rep. Butterfield during his visit to the Telamon office on Main Street. “I know of the challenges you face, especially here in Tier 1 rural counties that you serve. I understand the challenges faced by your county commissioners, they can’t raise taxes on a whim to pay for these types of programs. I’m here to listen to your needs.”

“It’s important to say how the programs we offer make an impact on our local communities,” White said. “By helping people achieve a better education, we can help them find jobs, which in turn helps provide for their family, to include better housing.”

Telamon’s efforts are supported by other local organizations. White said the Ahoskie branch partners with local NC Works programs offered through the NC Dept. of Commerce, Roanoke-Chowan Community College, the Ahoskie Chamber of Commerce, and with local businesses in regards to job placement. 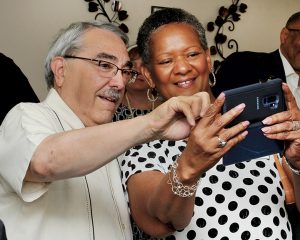 U.S. Congressman G.K. Butterfield looks at a photo taken by a local constituent during his Tuesday visit to Ahoskie. Staff Photo by Cal Bryant

White observed that the entire effort was a cycle.

As a testament to how Telamon makes an impact on local lives, Michael Hill was asked to share his story.

“Mr. Hill started with a dream; Telamon helped turn that into reality,” said White. “Now he’s giving back, helping others realize their dreams.”

Hill began by stating he was working a job he did not like, nor thought he had much of a future.

“When I heard about Telamon, I called Mrs. White and Mrs. (Aleta) Tootle (who serves as a Work Force Development Specialist in the Ahoskie office) and asked them how could they help me,” Hill said. “They asked what type of work did I like, and I told them barbering….that I use to help Mr. Bill Hoggard when I was 13-14 years old and I loved it.”

With the help of Telamon, Hill said he was able to refine his skills by enrolling in barbering classes at Pitt Community College.

“I could not have completed those classes without the help of Telamon,” Hill stressed. “I passed the state certification and now I’m a licensed barber.”

Hill is now giving back to the community by offering free haircuts to youngsters in the weeks leading up to the start of a new school year.

“I will continue to do this,” he promised. “I want to thank everyone who had a hand in helping me. Ya’ll stuck by me.”

“That was a powerful testimony of what Telamon can do,” Rep. Butterfield remarked.

Another Telamon client said the Ahoskie office is assisting him in starting a career in nursing.

“It was an honor to host Congressman Butterfield,” White told the R-C News-Herald. “He gave us updates on what is happening in Congress and we shared with him what we do here in the community.”

She explained that Telamon’s funding comes from the U.S. Department of Labor through its WIOA (Workforce Innovation and Opportunity Act) program. WIOA is designed to strengthen and improve the nation’s public workforce system and help get Americans, including youth and those with significant barriers to employment, into high-quality jobs and careers and help employers hire and retain skilled workers.

For more information, call (252-332-1910) or visit the Ahoskie Telamon office, located at 422 Main Street. Other than White and Tootle, the office also employs Charity Davenport, a Work Force Development Specialist.