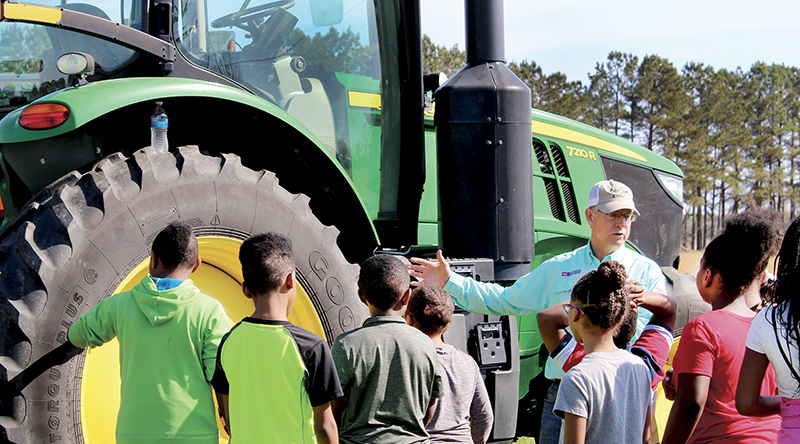 SEABOARD – If you passed by the Seaboard Lion’s Club on Thursday morning, you might have heard the sounds of pigs squealing, goats bleating, and children laughing.

“We try to do it once a year for all the fourth graders in the county,” said extension agent Beth Burchell. “It gives them an idea about agriculture and what goes on. Agriculture is the number one economic driver in our county.” 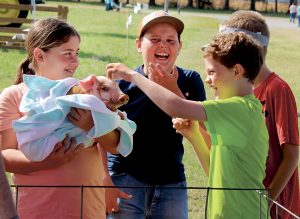 Fourth graders received the opportunity to get “up close and personal” with a baby pig at Farm Fun Day. See the R-C News-Herald’s Facebook page for additional photos from this event. Staff Photo by Holly Taylor

“I think a lot of kids don’t understand that it takes a lot of hard work and dedication for farmers to produce food and fiber that feed and clothe them,” she continued.

Baldwin brought two young pigs that students were allowed to carefully touch and hold. He answered a variety of their questions such as why pigs like to roll in the mud.

“I think because it feels good on their skin,” he responded, explaining it helps them cool off on hot days.

Burchell, whose specialty is livestock, conducted her presentation with a sheep named “Popcorn.” After asking questions, students learned interesting facts like how sheep come in different colors and their meat tastes like what they eat. Burchell reassured a few wary students that sheep aren’t scary, and she allowed them to feed a few apple slices to Popcorn.

Sara Villwock and Ann Lawrence, who are in charge of the county’s 4-H program, taught students all about chickens at the poultry station. Among the new facts they acquired was that chickens used for meat production are called “broilers” and ones producing eggs are “layers.” They also discussed the differences between healthy and unhealthy chickens. Afterwards, the students took turns gently holding baby chicks.

Horticulture agent Victoria Neff didn’t have any live creatures on hand for her presentation about bees, but she did pass around beekeeping gear for students to try on. The discussion included the different types of honeybees—queen, worker, and drone—and what roles they play in the hive as well as why bees are important to plants.

Neff also explained the process bees use to make honey, which involves collecting pollen, eating it, and then spitting it back out.

“So honey is basically bee vomit,” she said with a laugh, much to the amusement and horror of the students listening.

Over at the tractor station, the children had a chance to view large pieces of farm equipment in person. Anass Banna, who was joined by Billy Barrow from the Bertie County Extension Office, showed everyone the ins and outs of the tractors which were on display courtesy of Gay Implement in Seaboard. They talked about things like tires and GPS systems as well as all the different ways farmers can use tractors in their work. Many students were eager to climb into the cab of the tractor and enjoy the view from up there.

Northampton Cooperative Extension Director Craig Ellison was in charge of the crop presentation. He passed around a handful of cotton, peanuts, and soybeans along with a few corn cobs for students to actually feel with their fingers. The children were surprised to learn that both peanuts and soybeans are legumes, which means they pull nitrogen out of the soil to grow. They also learned that the rows of corn on a corn cob are always an even number; tobacco can be used to make perfume; and soybeans can be used to make crayons.

Ellison said afterwards he thought the students enjoyed getting hands-on experience at the event, and he hoped they left with a better understanding of the agriculture happening right in their own county.

“The more you get to interact with what you’re trying to learn, the more it sticks,” he said.