JACKSON – The main word is “excitement.” That’s what people in and around Jackson seem to be feeling about the new grocery store in town. 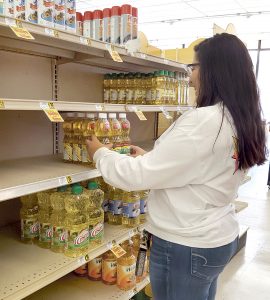 Cheyenne Revelle stocks the shelves on Monday at Food Fresh in Jackson. The locally-owned grocery store plans to have a “soft opening” this week. Photo by Angie Todd

Food Fresh, which now occupies the same building that previously hosted Piggly Wiggly and Boone’s IGA, is having a “super soft opening” this week, according to owner Bennett Hobbs. An official grand opening will be held at a later date.

Hobbs is also the man behind two other nearby grocery stores: Gaston Market and Rick’s Country Market in Weldon. He said he wasn’t exactly looking to expand to another grocery store, but considered it after Northampton County Commissioner Charles Tyner approached him about the proposal last year.

“He came to me back in July and asked me,” Hobbs explained, adding he agreed to it because he recognized the need for a grocery store in the area.

He also acknowledged he was grateful for the support the county commissioners have given him during the process of opening the new grocery store.

As previously reported by the News-Herald, Northampton County purchased the vacant former Piggly Wiggly building in May 2018 for a total of $75,000 with funds from the county’s Economic Development Capital Project. In October 2018, the Board authorized the sale of the building to South Dominion LLC which is owned by Hobbs and his business partner. At their December board meeting, the commissioners voted to approve an application by South Dominion to the county’s Revolving Loan Program (RLF) for an approximate total loan of $225,000.

The store had been vacant since Piggly Wiggly shut down in 2014, but Hobbs reported most of the work they had to do was simply basic maintenance and some reorganization.

“The building wasn’t in bad shape,” he said.

Tyner recognized the duo of grocery store entrepreneurs at the regular commissioners meeting held Monday, Mar. 18, expressing his excitement for the project again as he has previously mentioned at several past meetings.

“In that store, they don’t have just one brand of mayonnaise, they’ve got five brands,” Tyner continued with a lighthearted example of the variety the store has to offer.

Hobbs said the Food Fresh is a regular full-sized store containing all the usual staples of meat, produce, frozen food, dairy, and more. There are also plans in the works for a hardware store to occupy a portion of the building, but it will be a few more months before that is ready, Hobbs added.

Since Piggly Wiggly closed, the only other grocery store in town was Jackson Grocery, which was located a little farther down the road in the heart of the downtown district. That too closed down last year, leaving Jackson and the surrounding area as a designated “food desert” again. That’s why this new grocery store has generated a lot of buzz of anticipation recently.

“I get calls every day wanting to know when the grocery store is going to open,” said Judy Collier, Director of the Northampton Chamber of Commerce. “Everybody is looking forward to them opening.”

Collier’s office is located at the Northampton County Visitor’s Center not far down the road, so she said she’ll be one of the customers when Food Fresh opens.

Jackson Mayor Jason Morris said the store will be a great benefit for the town in many ways, including giving citizens an opportunity to shop locally.

“I think it’s going to be a really nice addition,” he said. “It’s just a great thing for the community. I hope everyone will join in and shop local.”

Food Fresh is located at 312 West Jefferson Street. Hobbs said they plan to be open from 8 a.m. to 8 p.m. Mondays through Saturdays, and from 8 a.m. to 7 p.m. on Sundays.

JACKSON – The Northampton County Board of Education accepted the resignation of school superintendent Dr. Monica Smith-Woofter during their regular... read more