Mrs. Baker, daughter of the late George Dewey Jernigan and Moell Bazemore Jernigan, was a native of Bertie County. She graduated from Aulander High School and attended East Carolina Teachers College as well as Chowan College. She was employed by the United States Postal Service and eventually served as the Aulander Postmaster for several years prior to her retirement. 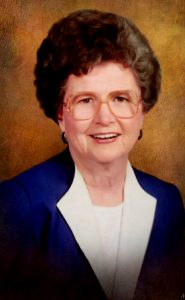 She was a former member of Connaritsa Baptist Church where she served as an organist and choir director for an extended period of time. During recent years, she served her Lord as a member of Aulander Baptist Church where she participated in the choir and other church ministries. Mrs. Baker was a God-fearing woman who held an unwavering love for her entire family and was well known for her wonderful sense of humor.

A visitation will be held at Garrett-Sykes Funeral Home-Ahoskie, 205 NC HWY 42 West, Ahoskie, NC on Tuesday, February 19, 2019 from 6:30 pm to 8 pm. The family will receive visitors at other times in the home of Peggy and Carl Cayton on Liverman Mill Road, Ahoskie.

A celebration of Mrs. Baker’s life will be held at

In lieu of flowers, memorial donations may be made directly to The Village at Woods Edge – Asa’s Neighborhood Memory Care at The Village, 1401 North High Street, Franklin, VA 23851; or you may donate online by visiting www.tmcfunding.com/search; then type Jane Baker.

Garrett-Sykes Funeral Home will be serving the Baker family and online condolences may be directed to the family by visiting www.garrettsykesfs.com.