JACKSON – The County Manager’s seat by the Northampton County Board of Commissioners was vacant here on Feb. 4 at the Board’s regular meeting. Kimberly Turner, who served in the position since 2014, had a seat in the audience instead. 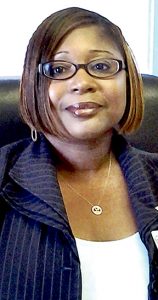 At the beginning of the meeting, the Board Chairman Charles Tyner added “county manager” to the evening’s agenda. When it came to that part of the meeting, he simply called for the Board to make a motion without any formal presentation.

Commissioner Joyce Buffaloe seconded. The vote was unanimously in favor with no discussion.

The Board offered no explanation for Turner’s sudden resignation.

However, it’s general knowledge that a county manager in the state of North Carolina works “at the pleasure of the board (of commissioners).”

The News-Herald has learned that Turner did have a written employment contract with the county. There was apparently an agreement reached regarding that contract, per the wording of Faulkner’s motion, but that document is not public record, according to state statutes.

During the citizen comments portion of the meeting, former commissioner Robert Carter, who served 20 years on the Board before losing a reelection bid last year, spoke in favor of Turner, and asked the Board to rescind their motion.

“Ms. Kim has put in 15 years of her life here in this county,” Carter explained. “She began her work part-time in the County Manager’s office and part-time with the Register of Deeds. She continued moving up the ladder and became the Clerk to the Board of Commissioners. From that point, she moved to the Assistant County Manager, and in 2014, under my leadership, she was appointed County Manager.”

“And I found her to be very effective,” he continued, recalling her skill balancing the county’s budget. “That is hard work. That is knowing what to do on the job.”

Carter requested the Board rescind their motion and recess into a closed session where he could “educate the new members of this Board as to what has transpired here in Northampton County.”

Carter did not elaborate what he was referring to other than a brief mention earlier in his comments to the county’s finances.

“I’m asking you, who’s keeping the house? I know and you know that these positions cannot lay very long without some attention. I also know we cannot afford to put unqualified people in these positions,” Greene stated.

“So again, who’s keeping the house,” she questioned once more as she concluded her statement.

As is their policy, the Commissioners did not address any citizen comments directly, but promised to offer a written response to those individuals in the coming days.

Commissioner Kelvin Edwards asked if the Board would enter into closed session per Carter’s request, but Faulkner responded, “under advisement of our attorney, that is not something we need to do in closed session.”

JACKSON – During their regular meeting here on Feb. 4, the Northampton Commissioners voted to approve the voluntary resignation of... read more