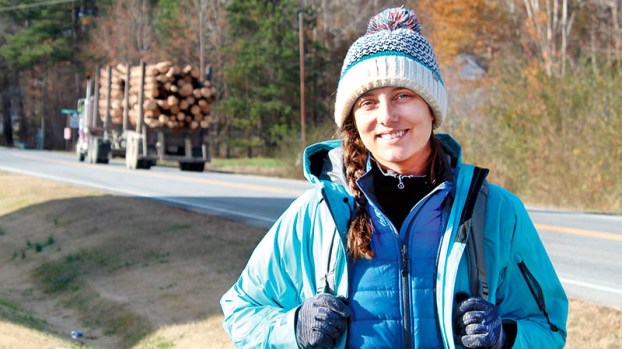 Jessie Grieb takes a break along NC 45 in Cofield as she is on a quest to walk from Maine to Florida in an effort to raise awareness to drug overdoses and the struggles of addiction. | Staff Photo by Holly Taylor

One step at a time

COFIELD – Plenty of people pass through the Roanoke-Chowan area on their way to different places. Most travel by car or truck. But recently, one woman made her way through on foot.

Jessie Grieb is walking along the East Coast in order to bring awareness to drug overdoses and the struggles of addiction. The News Herald caught up with her on Dec. 5 as she was walking through Cofield, traveling south along Highway 45.

“I struggled with addiction to opiates since I was about 17,” Grieb said, explaining she got into it with her then-boyfriend along with her brother. “By 23, they both overdosed and passed away within 10 months of each other. I’ve struggled trying to get clean and get through that, so I met Brett Bramble on his walk from Key West [Florida] to Maine.”

Bramble, who had lost his sister to an overdose, was crossing the country to spread awareness about the addiction problem many people face.

“What he was doing inspired me,” Grieb admitted.

Grieb, who was living in South Carolina, suffered a relapse during her attempt to stay clean. After that, she moved to Maine to stay with relatives and get away from her environment. At the same time, Bramble was finishing up his walk in Maine. Grieb reached out again and joined him for the last 300 miles of the journey.

Because of the positive experience, Grieb was inspired to do her own walk down the coast. She started in Ellsworth, Maine on July 23, and her plan is to make it home for Christmas with her family in South Carolina, and then complete her walk to Key West by mid-March next year.

There have been a few challenges along the way. Poor weather conditions and rough terrain have slowed her progress on occasion, and her cart full of supplies has broken down a few times as well. At one point, she even had poison ivy.

But despite the issues, Grieb kept walking forward. The benefits have far outweighed the negatives, she said.

“I just was broken. Mentally, physically, spiritually. It’s definitely done a lot of healing,” she admitted. “I sleep better. I eat better. Being in Maine and starting up there, it’s just so beautiful. That in itself was really healing. I needed it at that time.”

She said she’s really enjoyed being back in small town rural areas now that she’s made it to Virginia and North Carolina.

She’s done some parts of her cross-country trek alone, but occasionally she is joined by other walkers who want to add their support or walk in memory of a lost loved one too. For parts of her journey through the Roanoke-Chowan area, she was joined by Bramble and another friend, Chris West.

Many people often stop to make sure she’s okay or to bring her supplies. Sometimes they help her find a place to stay for the night if she doesn’t plan to camp out. That’s the kind of thing, she said, which inspires her to keep going even if it’s tough.

“People have been amazing. It’s totally changed my thoughts on people in general. There’s a lot more good in the world than we think,” she explained.

“I’m still figuring out a lot of stuff myself. I’ve definitely fallen down more times than I can count,” she said, but for people struggling with addiction like herself, she encouraged them to keep reaching out and to not give up.

“There’s not a day that goes by that I don’t run into somebody that’s going through the same thing,” she continued.

In the beginning, Grieb said she could barely walk two miles, and blisters quickly covered her feet. Now she typically is able to walk 15 to 20 miles a day. She said being a part of something bigger than herself gives her the motivation to continue.

All it takes is just one step at a time.