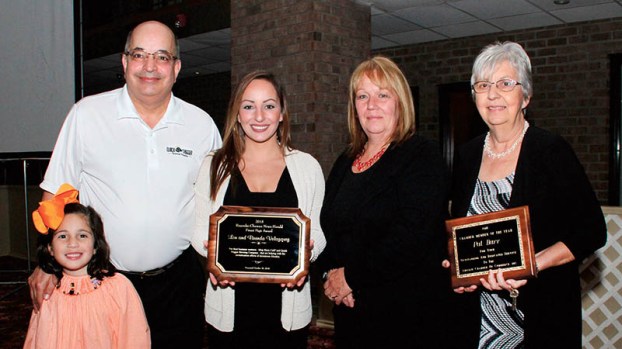 AHOSKIE – At the age of three, Ben Sutton Jr. boldly walked to the front door of a nearby home in his new residential neighborhood, stuck out his hand, looked a stranger in the eye, and introduced himself.

It’s that type of tenacity and demeanor which has carried Sutton far in life.

Now, after building one business from the ground up and selling it; and inheriting the leadership role in another well-established company and orchestrating a deal to sell it for over $2 billion, Sutton, at the age of 57, couldn’t fathom the idea of retirement. So, instead, he’s back in business once again.

Sutton, formerly of Murfreesboro where his father once served as the Business Director at what is now Chowan University, shared the story of his mega successful life with a huge crowd attending the 75th annual Ahoskie Chamber of Commerce Banquet, held Oct. 30 at the Ahoskie Inn.

He told of his upbringing in a small town, one where valuable lessons were learned at home and within the 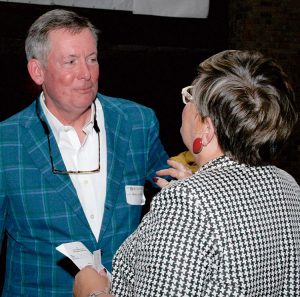 Ben Sutton Jr. chats with an individual following his keynote address at the 75th annual Ahoskie Chamber of Commerce Banquet.

“I don’t believe in consequence; I believe God put things in our life for a reason,” Sutton said in his opening remarks. “The success and the joy I’ve experienced in my life is because I grew up in Hertford County, North Carolina. I grew up in an amazing home; it was where I learned two valuable lessons….how to build relationships in life, and how to pursue your passion; set your sights high and go after it. I patterned my life on three core values: faith, family and friends.”

A 1976 graduate of Ridgecroft School, Sutton packed his bags for college at Wake Forest University. There he worked his way through school, employed in the alumni office and the athletic office, working under the legendary WFU Athletic Director Gene Hooks. He was also a member of the university’s cheerleading squad…..or as he said with a laugh, “a great place to meet girls.”

After receiving his undergrad degree, Sutton entered Law School at WFU, balancing those studies around a 60-hour work week.

“I learned if you want something bad enough, you have to work for it,” Sutton stated.

His career in law lasted all of one day. Sutton had taken a job with a law firm in Eden, about an hour’s drive from Winston-Salem. On his very first day, the Wake Forest Athletic Department called and offered him a job as an Assistant Director. He accepted, and even though he didn’t know it at that particular moment in time, that move set the table for bigger and brighter things to come.

Eventually, Sutton became involved in sports marketing. In 1992 he founded ISP Sports, a business that is credited in the United States with “inventing” the college sports multi-media business. His business model is now used industry-wide, a model that also generated new sources of revenue for the college athletic programs his firm represented.

ISP Sports began with one university (Wake Forest) and grew to handling sports marketing for over 200 schools.

He eventually sold that firm for $150 million to IMG College, and was hired by the new owner to run the business. By the time he engineered the sale of IMG for $2.4 billion in 2014 to Silver Lake Capital Partners and WME, IMG College was the national market leader in media, licensing, ticketing and stadium seating, working with over 225 universities, college athletic conferences, the NCAA, and the College Football Playoff.

During his tenure, IMG managed the largest radio network in America, producing and distributing over 35,000 hours of programming to 2,200 radio stations nationwide; distributed nearly 5,000 hours of TV programming to over 200 outlets across the US; was the largest producer of college sports publications in the country; and managed the most official major college sports websites nationally.

“People now in the sports media industry now refer to a successful business model as the ISP way; it’s become the gold standard in all of sports,” Sutton noted.

Yet, after the sale of IMG College, Sutton found himself unemployed; and without a desire to retire. So, he contacted a few of his former ISP and IMG employees to judge their reaction to a new start-up company. They were happy to receive that phone call, so much to the point that Sutton is now the founder and chairman of Teall Capital. The company and related partnerships manage investments in a diversified portfolio of businesses including ownership interests in Tailgate Guys (national market-leading hospitality company), an energy beverage company, a national sports/entertainment merchandising business, the Winston-Salem Dash (minor league baseball club), Alpha Omega (Napa Valley winery), North Carolina farming operations, multiple technology companies, real estate, and restaurants.

“We had built companies before, so why not do it again,” he stressed. “It was like that famous line by Jake and Elwood Blues in the movie The Blues Brothers, we put the band back together. We started with four partners and now have 350 employees. We plan to have 700 employees in a year or two.

“One of the most patriotic things you can do in America is become a job creator,” Sutton added. “I couldn’t sit on the sideline (after the sale of IMG) because I know how to create jobs; I know how to help people build wealth.”

While apologizing if he stepped on the toes of President Trump supporters in his Ahoskie audience, Sutton emphasized that, “we don’t have to make America great again; it’s already the greatest country in humankind. I have traveled all over the world and have never met a citizen of another country who is not envious of the United States. This is the most successful country because capitalism is the best economy in the whole world.”

Even though he’s back in business, Sutton spends time at speaking engagements where he motivates, leads and inspires people.

“And this all leads back to Hertford County and Murfreesboro where I learned all these great lessons of life, those old-fashioned values,” he remarked. “This is where I developed toughness and moxie. This will always be my home. If the American dream can be realized by a man who grew up in Murfreesboro, it can be realized by anyone.”

And for Sutton it all began at the age of three with handshake and the start of learning how to build lasting relationships.

As part of the evening’s festivities, Amy Braswell, Executive Vice President of the Ahoskie Chamber, informed the crowd of several economic development plans the organization is currently involved. This included the Chamber’s ongoing efforts with local, regional and state officials to complete the four-laning of US 158 between I-95 and Hertford County. Another agenda item is the Regional Visitors Center, scheduled to open in February on Main Street in Ahoskie.

R.J. Myers, President of the Ahoskie Chamber’s Board of Directors, presided over the banquet.

Two awards were presented. Pat Barr, a longtime member of the Chamber’s Women’s Division, earned the Chamber Member of the Year Award. Lou and Brenda Velazquez, owners of Mug Shotz Café and Quick Trigger Brewing Company, were recognized as the recipients of the Front Page Award, given annually by the Roanoke-Chowan News-Herald.

ELIZABETH CITY – An Ahoskie man is dead, the victim of shooting that took place here in the early morning... read more