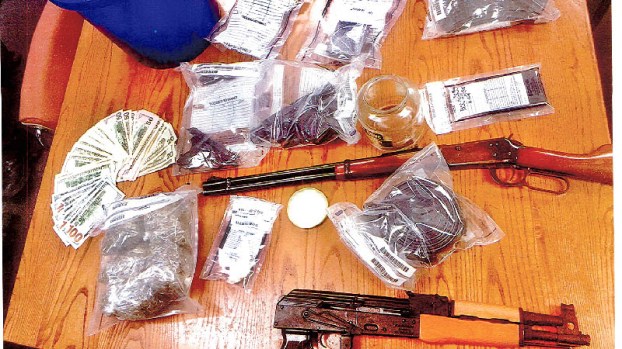 A search warrant served at a Meadow Drive residence near Murfreesboro on Monday led to the discovery of drugs, weapons and nearly $4,500 in cash. | Photos by Hertford County Sheriff’s Office

MURFREESBORO – Marijuana, cocaine, four weapons – including one reported as stolen – and nearly $4,500 in cash were seized from a residence near here on Monday after a team of local law enforcement officers served a search warrant.

Deon Devon Arrington, 34, of 114 Meadow Drive, Murfreesboro, was arrested by Hertford County Sheriff’s deputies following a search of his residence.

Arrington was jailed under a $50,000 secured bond pending his court appearance.

Hertford County Sheriff Dexter Hayes said the arrest stemmed from what began as a call for damage to property at Arrington’s residence.

“Deputy Z.B. Mize was dispatched to that residence after we received a report that a female was there breaking windows as well as causing damage to a vehicle,” Hayes said. “Deputy Mize observed that damage upon his arrival.”

Hayes reported that Mize knocked on the back door of the residence and was met by Arrington.

“Deputy Mize said the entire time he was asking questions of Mr. Arrington, he appeared very nervous,” Hayes stated. “Mr. Arrington refused to tell Deputy Mize anything about the property damage, nor did he share any information about the individual responsible for that damage. He said he did not want to press charges.”

The Sheriff added that Mize noted a smell of marijuana during the interview process.

“What Deputy Mize did in response to that speaks highly of his law enforcement training,” Hayes stressed. “He didn’t ask Mr. Arrington about that smell. Instead, he completed his on-site interview about the property damage and left the residence.”

Upon returning to the Sheriff’s Office, Mize began the process of having a search warrant approved for Arrington’s residence. He also researched Arrington’s past criminal history, discovering three previous arrests, all in Hertford County, on various drug charges.

Armed with that warrant, Mize returned to Arrington’s residence, this time accompanied by four HCSO officers, members of the Murfreesboro Police, and an agent with the Down East Drug Task Force.

Inside a bedroom, the officers discovered 250 grams of marijuana, 13.5 grams of cocaine, $4,403 in U.S. currency, and four weapons – three handguns and one rifle, as well as several boxes of ammunition.

Hayes said due to Arrington’s status as a convicted felon, none of the weapons were registered to him. One – a Glock 40 caliber pistol – was reported by the Greenville Police as stolen within their jurisdiction.

“This was great police work by Deputy Mize,” Hayes said. “This all evolved from what started as a call for property damage and due to Deputy’s Mize’s skills and training it turned into much, much more. I commend Deputy Mize and all the other officers on the scene for their work to remove these illegal drugs and weapons from our streets.”

MURFREESBORO – Elementary school-aged children in Murfreesboro will soon have the option to participate in the town’s new afterschool recreation... read more