MURFREESBORO – Despite playing an opponent that hadn’t even been able to get on the field to practice in two weeks, mistakes and errors doomed the Chowan University football team here Saturday night. The Hawks let a fourth quarter lead slip away as Fayetteville State for the second straight year pulled off a late score and tripped up Chowan 40-38.

“Mistakes,” fumed Chowan head coach Tim Place after the game. “You can’t make mistakes like we did against a team like this and expect to win.”

Still, there were plenty of bright spots for the Blue-and-White. For the second straight Saturday quarterback Bryce Witt had a monster game; throwing for 368 yards and four touchdowns while running for another one.

Witt also spread it around: four different receivers caught scoring tosses, led by Paul Gooden, who hauled in five catches for 71 yards and a touchdown.  Dominic Floyd, Tyrell Freeman, and Adrian McNeil also registered a touchdown reception. Freeman was also the workhorse on the ground with 17 carries for 79 yards.

On the defensive side, the Hawk defensive backs also gobbled up more interceptions, this time with 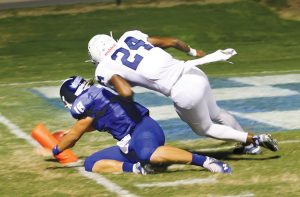 Chowan University quarterback Bryce Witt stretches the ball just past the pylon Saturday night for a score over Fayetteville State defender Jerome Bentley. Despite accounting for five touchdowns – four through the air – Witt and the Hawks weren’t able to pull out a win as the Broncos took a 40-38 victory. | Next Level Photos / Charles Revelle

a pair snagged by Bryan Bryant and George Parker with one apiece.  Marquise Baldwin was all over the field registering 16 tackles.  Teammate Connor O’Brien recorded 13 tackles, while Jacquae Peart posted 10 tackles including two tackles for loss.

In the beginning, the Broncos’ layoff was evident as Chowan jumped out to an early 7-0 lead just 1:44 into the contest. After a couple of Witt runs on the drive, the signal-caller found Dominic Floyd for a 31 yard touchdown pass to put the Hawks up 7-0.

Then on Chowan’s second drive, Witt tossed a ‘chippie’ to Paul Gooden for the quick strike second score that put the Hawks up 14-0.

FSU finally shook off the lack of practice time when kicker David Lamb booted through a 39-yard attempt for a 14-3 Hawks lead after one period of play. It would be the first of 24 unanswered by the Broncos.

On the Broncos’ first possession of the second quarter quarterback Collyn Anderson found receiver Brandon Person-Boyd over the middle. When the two Chowan defenders collided on the play, it was just a short stop-shot to the end zone. In all, the play totaled 58 yards and made the score 14-10, Chowan following the PAT.

It looked like the momentum might swing back Chowan’s way when Jamal Hampton picked off an Anderson pass in the end zone but a pass interference call allowed the Broncos’ drive to continue.  FSU would later punch the ball in from a yard out to lead 24-14.

But then it was Chowan’s time for a wake-up call as Witt and Torry Baker hooked up on a pair of passes before Witt was caught in the backfield looking for a receiver. Instead, the Petersburg sophomore kept it and slid into the end zone, just past the pylon from 11-yds out and it was 24-21, Fayetteville.

With some two-and-a-half minutes remaining Chowan took the lead as Witt again had to scramble, but found an open Freeman in the flat and he rambled 28 yards for the rest to regain the lead, 28-24, Chowan, just before the half.

Chowan came out of the mid-break with good momentum. First, they held the Broncos and then Witt found Gooden along the sideline. But in a strange move, he would fumble the ball directly into the arms of Elvin De La Rosa near midfield to end the drive.

Fayetteville State converted off the miscue to re-take the lead 31-28.  But Chowan would come up with the equalizer as Jackson Brooks’ 39-yard field-goal attempt weaved through the uprights and it was 31-all headed to the fourth quarter.

Late in the third, Bryant got his pick near midfield and Chowan capitalized off the turnover as Witt found Adrian McNeil for an 18-yard touchdown in the back of the end zone to lead 38-31 with 12:47 remaining.

The Broncos were driving deep in the Chowan red zone on their next possession when Chowan benefitted from another FSU turnover as Jacquae Peart fell on a ball hiked over the head of Anderson. But in nearly 10 minutes of non-action, neither team could traverse the end line. Then with less than three minutes to play, All-CIAA performer, running back Stevie Green, drove to the eight-yard line.  From there Donshel Jetton barreled in to knot the contest at 38-all.

On the ensuing kick-off, deep in their own territory, the Hawks got a late penalty, pushing them back to the eight yard line. Then, looking for a receiver in the end zone on the next play, Witt was sacked in the end zone for a safety to take a 40-38 lead with 2:41 remaining.

Chowan still had life. With little over a minute to go, when FSU tried a fake punt on fourth and two as the defense made a huge stop and the ball went over right near mid-field at the 45-yard line.

Driving for at least a field goal Witt found Baker in the middle of the field for a quick strike but the Broncos stripped the ball from his grasp and all that remained was to run out the clock for an FSU win.

“We haven’t played in three weeks, haven’t practiced in two; this win was just made on one thing: emotion,” said a jubilant, but reserved FSU coach Richard Hayes.

Gates County and Bertie High Schools with get in their weather-delayed game tonight (Thu.) that was postponed from the end... read more