Chowan University sophomore quarterback Bryce Witt ran for a pair of scores, and then ended up passing for three more on a day as he torched the Hawks’ record books with a 439 yard aerial attack. That mammoth effort helped Chowan to a 55-45 non-conference win over the visiting McKendree Bearcats in the 2018 home opener here Saturday at Garrison Stadium.

There was more Chowan offense as Tyrell Freeman tallied his second 100-yard rushing outing of the season with 123 yards on 14 carries and twice found the end zone.

Paul Gooden led the Hawks in receiving with six catches for 190 yards and two scores.  The first scoring catch came when he and Witt connected on a 79-yd slant for the second longest reception in program history.  Torry Baker also topped the century mark in receiving as he hauled in five catches for 114 yards and a score.

Despite missing a good portion of the second quarter for what was a premature ejection, 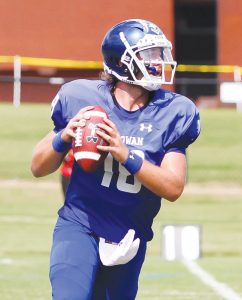 Chowan University quarterback Bryce Witt ran for two touchdowns and threw for three more; all part of a record-breaking 439 yard passing performance as the Hawks topped McKendree University 55-45 Saturday for their first win of the year. | Next Level Photos / Charles Revelle

sophomore linebacker Dre Terry mauled the Bearcats defensively with 13 tackles including 2.5 tackles for loss. George Parker tallied eight tackles on the afternoon. The Chowan defense held back-to-back GLVC Offensive Player of the Week, Reece Metcalf, to 306 yards through the air.

“For three hours we competed,” an exhausted head coach Tim Place said breathlessly after the game. “It wasn’t perfect, but we played hard for 60, and we beat a very good team.”

McKendree seemed to exploit the Hawks’ kicking game for most of the day, winding up in great field position for most of their drives. They marched the ball down the field on the opening drive of the contest after a long kick-off return and took a 7-0 lead just 2:39 into the contest on a quick strike seven-play drive.

Chowan’s defense stepped up and forced a field goal attempt on the Bearcats’ next possession as McKendree led 24-7 – scoring 17 unanswered – as the clock read 10:35 remaining in the half.

Chowan took the next possession nine plays for 83 yards to end the scoring drought. Witt would connect with Imeek Watkins twice and Freeman once on the drive before taking it in himself from 11-yards out.  The point-after-attempt was botched to leave the score at 24-13.

On the next McKendree drive, Terry was called for targeting on a vicious hit on the Bearcats’ Jace Franklin and was ejected; however, the officiating crew agreed to review the play and make a final judgment at halftime. The Bearcats then marched down the field looking to answer thanks to the hard running of Preston Thompson. But the Hawks’ defense stepped up, despite the loss of their field leader, Terry, and Josh Berry forced at the two-yard line in the shadow of the goal line and Keandre Randerson recovered the miscue at the Hawks’ one yard line.

With three minutes left in the half and 99 yards to go, Witt connected with Gooden twice before finding Baker for a 39-yd fade down to the three yard line.  Once again, Witt called his own number and hurled across the end-line.  He then found Michael Offutt on the two-point conversion to close the gap to 24-21.

The Bearcats would tack on a field goal to end the half to lead 27-21 at intermission.

Chowan received the second half kickoff and made the most of the deference from the start of the game.  Freeman would chew up rushing yards for two good gains on the drive before Witt found Baker on a post pattern from 27-yards out to take the Hawks’ first lead of the contest 28-27.

On their next drive, pinned at the five-yard line, Dominic Floyd took a lateral from Witt, and found Baker for a 39-yd reception before a nine yard plunge by Freeman found the end zone, allowing Chowan to go up 35-27, outscoring the Bearcats 28-3 since early in the second quarter.

McKendree would start their next drive near midfield at their own 42-yd line with 2:59 remaining in the quarter, and end the period with a score.  Two passes and three runs got the Bearcats into the end zone, and a two-point conversion evened the score at 35-all.

In the fourth quarter, Chowan went back on top when Witt found Dominic Floyd for a 21 yard reception and Imeek Watkins on a 14-yd pitch and catch. That would set up Michael Offutt for a 16-yard scamper for the score to put the Hawks back on top 42-35.

The Bearcats made it all-square again, 42-all, with a six play 63-yard drive, but their ensuing on-side kick only traveled eight yards allowing the Hawks great field position at the McKendree 43. Chowan scored two plays later: a 33-yard gain, Witt to Imeek Watkins, before Freeman punched it in from 10-yds out making it 49-42.

With less than 10 minutes left to play, McKendree was held out of the end zone, but did manage a field goal from 33 yards to cut the score to 49-45.

Chowan would nail the coffin shut when Witt connected with Gooden on a second scoring drive that ended with another long one, a 47-yd touchdown pass, but the blocked point-after made it 55-45.

“My receivers were making plays,” insisted Witt after the game. “They were hitting the routes and my throws were finding them.”

The Bearcats still had life as Terry broke up one pass before tackling a receiver behind the line for a loss of two yards before Arrington Bazemore sealed the win with a sack of Metcalf.

Chowan then methodically ran out the clock, milking out all 4:15 left in the contest for the victory.

“The defense played much better in the second half,” said Place. “While this win feels good, our hearts and prayers go out to the folks south of here who’re hurting because of the hurricane.”

Chowan hosts Fayetteville State in the Hawks’ CIAA opener next Saturday, Sept. 29.  The Broncos home game with Elizabeth City State last Saturday was cancelled in the aftermath of the storm. Meanwhile, next week’s kick-off at Garrison is at 6 p.m., and the contest will be Community and Club Day.