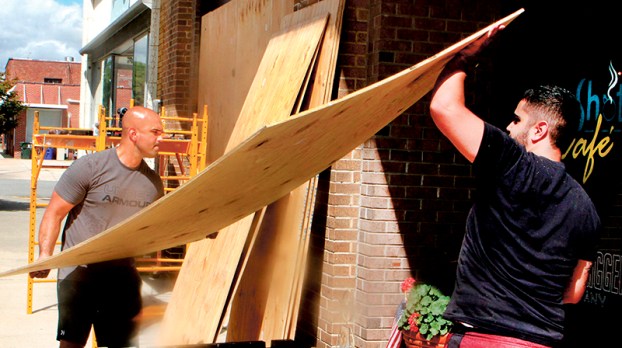 Workers busied themselves on Wednesday to board up a popular eatery and “watering hole” along Ahoskie’s Main Street. Owners of Mug Shotz Café and Quick Trigger Brewing Company said they are closing the restaurant/craft beer brewery on Thursday and Friday due to the local impacts expected from Hurricane Florence. Staff Photo by Cal Bryant

While the Roanoke-Chowan area may be out of the cone of projected direct landfall of Hurricane Florence, residents of the local four counties are being encouraged to not let their guard down in the face of this powerful and destructive storm.

As an example of the danger this hurricane poses locally, county officials across the R-C area still have their emergency plans in place. A new addition to those plans is a mandatory curfew in Hertford County beginning Thursday evening. Meanwhile, Bertie’s previously announced curfew remains in place.

Tuesday night and into Wednesday morning, Florence remains as a powerful storm, packing winds of 130 mph as it moved closer to the southeastern coast of North Carolina. There was shift southward in its projected path. It’s still projected to be either onshore or just off the coast near Wilmington on Friday morning, but then expected to drift south where it will severely impact the South Carolina coast before turning inland over the Palmetto State during the weekend.

However, due to the overall size of Florence, it’s rain and wind plus the accompanying storm surge that impacts the ocean, sounds and rivers can still affect the Roanoke-Chowan area.

Hurricanes are famous for changing their forecasted track at any given moment. Case-in-point was Hurricane Matthew in October 2016. That storm brushed the eastern coast of Florida and then tracked northward along the Georgia and South Carolina coastlines and was predicted to make a hard right turn out to sea as it neared the North Carolina coast. However, it moved further north than predicted, turning out to sea near Cape Hatteras and the Roanoke-Chowan area was hit with flooding rainfall that resulted in millions of dollars in damage.

“The safest thing is to not drop our guard,” said Bertie Emergency Management Director Mitch Cooper.

As of Wednesday morning, Bertie was the only R-C area county that was under a Tropical Storm Warning (NOTE: Hertford and Gates counties were added to the Tropical Storm Warning areas early Wednesday evening). Cooper said that meant county residents are reminded to remain vigilant and to prepare for sustained winds of 40+ miles per hour for a period of up to 36 hours beginning late Thursday.

Bertie is also under a Storm Surge Warning. The National Weather Service (NWS) says there is the potential for a 2-to-4 foot surge along the Albemarle Sound.

“Forecasters say they have never seen a storm track like this one has, which is why its movement is so unpredictable,” Cooper noted. “It is the size of Hurricane Hazel (which struck North Carolina in 1954) and still poses great potential for devastation.

As of Wednesday, Cooper said all of the stipulations set forth in the county’s State of Emergency declaration approved earlier remain in place. That includes a countywide curfew that begins at 8 p.m. on Thursday and the opening of three storm shelters at Bertie Middle School, West Bertie Elementary School and Colerain Elementary School. The opening of those shelters has been changed from Wednesday until 10 a.m. on Thursday.

NOTE: The curfew was originally scheduled to begin at 8 p.m. on Sept. 12, but was pushed up 24 hours to allow Bertie citizens more time to prepare for the storm.

The curfew is nightly from 8 p.m. until 5:30 a.m. Driving is permitted for persons attempting to reach work, making storm preparations, farm operations, and seeking medical attention. Public safety and medical personnel are also permitted. The intent of the curfew is to prevent accidents while “cruising to see the damages” or otherwise risk the lives of other motorists.

“Bertie County residents are advised to remain vigilant due to the continued uncertainty of the storm track and the persistent heavy rain bands that are anticipated with this storm,” County Manager Scott Sauer said early Wednesday afternoon. Bertie County’s forecasted rainfall is 7 to 12 inches, and the surge estimate for the Albemarle Sound is 2 to 4 feet.”

Sauer warned that the NWS strongly advises that heavy rain, strong winds and river flooding can occur any where within the ‘cone of projected impact’ seen on many computer graphic models.

“NWS continues to describe the rainfall estimates as historic and unprecedented, so we must continue to be on watch for rising water in low areas,” Sauer said.

Bertie County local government offices and the Courthouse are closed on Thursday and Friday.

Bertie citizens with questions about the storm can contact emergency management staff at 252-794-6370.

Hurricane preparations aren’t slowing down in Northampton County even if the forecast track Wednesday morning takes the eye of the storm further away.

“We’re going to have places for the people to go, and it’ll be up to them to make that decision,” Storey said.

Though recent forecast tracks seem to indicate Hurricane Florence’s worst impacts will be felt much farther south, Storey urged people not to let their guard down too soon.

“That storm is 400 miles across, which means from the eye to one side, it’s 200 miles,” he explained. “It’s looking like it won’t be as bad as it was on Tuesday, but it’s still serious enough to be concerned about it. I don’t want people relaxing yet.”

Wind and rain will still be a concern, the emergency coordinator emphasized.

“At best case scenario if it stays on the track, we’re still looking at 40 mph winds with gusts a little higher. But the rain is also an issue,” he said, noting that rain totals will increase if the storm stalls like predicted.

Storey concluded with a reminder the forecast can continue to change a lot in a short amount of time.

He added that Northampton County local government offices will close at 12 noon on Thursday, Sept. 13. Public safety and other essential departments will continue to operate on their normal schedule.

In Hertford County, a curfew now accompanies a State of Emergency that was issued Tuesday morning. The curfew is nightly from 8 p.m. until 6 a.m. It becomes effective on Thursday, Sept. 13 and remains in place until further notice.

Hertford County Emergency Management Director Chris Smith said on Wednesday afternoon that wind and rain, potentially heavy at times from the outer bands of the storm, remain as the biggest threats from the hurricane.

Information provided by Smith from the NWS denotes 4-to-6 inches of rain, possibly higher amounts in some locations, and winds of 25-to-35 mph (with gusts up to 50 mph) are expected in the county, which was placed under a Tropical Storm Warning early Wednesday evening by the NWS.

He pointed out that the mix of rain and wind has the potential for trees to topple.

There is a moderate risk of flooding in Hertford County, according to the NWS. Smith advises county residents living in low lying areas that typically experience flooding to take proactive measures, to include moving to higher ground at a relative’s or friend’s home (if available) or using one of the two storm shelters open at either Hertford County High School (Ahoskie) or Hertford County Middle School (Murfreesboro).

There is also the possibility of a storm surge from 1-to-3 feet along the Chowan River.

The Hertford County Board of Commissioner’s regularly scheduled meeting for Monday, Sept. 17 has been canceled.

Gates County Emergency Management is continuing to monitor the path of Hurricane Florence and plan accordingly. The current outlook puts Gates County in an area that may experience heavy winds and possible flooding over the course of the weekend.

If heavy wind and rain is still projected to have a major impact on the area, Gates County High School will open as a shelter location at 12 noon on Thursday, Sept. 13.

Citizens are urged to keep monitoring the storm and maintain their plan of action should conditions rapidly change.

There is a statewide information phone line in place to help connect residents to resources, to include the location of a storm shelter in their area. Dial 2-1-1 or 888-892-1162. The information line is staffed around the clock.

Meanwhile, Governor Roy Cooper on Wednesday authorized additional North Carolina National Guard soldiers to report for duty. By 7 p.m. Wednesday, at least 2,800 National Guard soldiers will be activated to preserve life and safety, provide route clearance of roads, and support communications and logistics in the areas where the storm will have an impact.