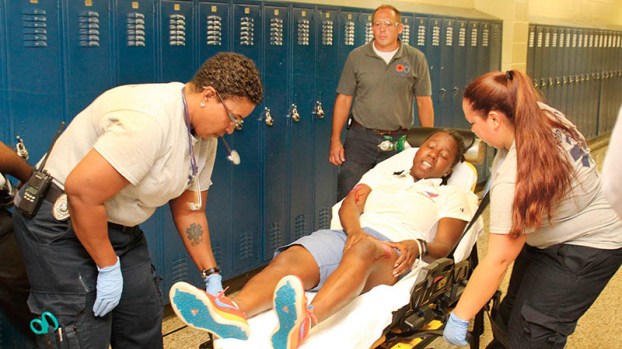 Hertford County EMT’s load a “victim” onto a stretcher as part of Tuesday’s active shooter drill held at Hertford County High School. The exercise included emergency responders – police, fire, and rescue – from across the county as well as officials from the public school system. | Photos by Cal Bryant

A few unfortunate souls screamed out in pain from several rounds of gunfire that had torn through their flesh.

A shooter was in their midst….taking cover in a short passageway leading to one of numerous classrooms on the ground floor of the “A” Building on the sprawling campus.

Meanwhile, teams of emergency responders rushed to the scene, led first by law enforcement officers whose primary job was to target the shooter and eliminate the threat. They were followed by a team of medical triage personnel, whose jobs entailed accessing the condition of the wounded – or in some cases, finding deceased victims. Finally, under heavy police escort, EMS crews were allowed inside to remove and transport the wounded to the hospital. 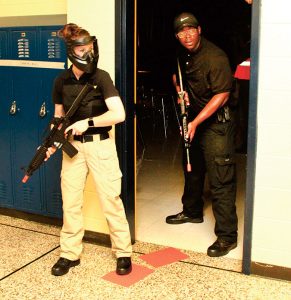 Law enforcement officers used Tuesday’s training to hone their skills, to include performing searches of classrooms at HCHS.

While all of the above was only a drill, there are too many real-life tragedies bearing an eerie resemblance to Tuesday’s mock shooting that have taken place and claimed innocent lives all across the United States.

What unfolded Tuesday at HCHS was an effort to sharpen the skills of local first responders if such a real life occurrence was to take place.

Billy Winn of Northeast Exercise and Training was in charge of Tuesday’s drill.

“The purpose of this training was to provide those in attendance with the most realistic as possible active assailant exercise,” Winn stated. “There were a lot of moving pieces to the exercise, to include evaluating how the Hertford County School System handled the setting up a command center, how they go about contacting the responding agencies, and how they handled their lockdown procedures. These are state mandated exercises for all schools.”

Using a team of evaluators, the exercise also included how the scenarios that unfolded Tuesday were handled by Hertford County’s E-911 Dispatch Center, and the response and actions taken by local law enforcement, fire department, and emergency medical services. The Northampton County and Bertie County Emergency Dispatch Centers also took part in the drill.

“We’ll be giving our report cards, for lack of a better term, to the school system and to the emergency response agencies when this exercise is over,” Winn promised prior to the start of the drill. “We want to see how each agency reacts.”

He also promised those taking part – to include using school system employees as the victims rather than actual students – that they would be, “seeing, hearing, and smelling things today that are not normal in a school environment.”

Winn added those elements were not intended to frighten anyone, but rather in an attempt to make the drill as realistic as possible. To carry out that scenario even further, make-up artists applied mock wounds to the victims.

There were no live weapons used in the exercise.

“This was an evaluation more than a training,” Winn said after the event concluded. “Therefore there are some opportunities for improvement, which is exactly what we were looking for. Now the Hertford County School System and all other agencies involved can use this evaluation to improve their emergency protocol and response.

“I was glad to have my business chosen to provide this needed exercise and I look forward to working with these agencies again,” Winn concluded. 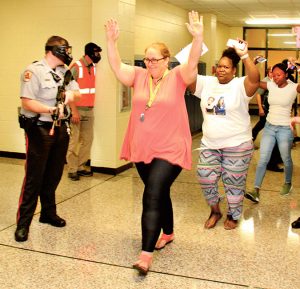 Hertford County High School faculty members were locked inside their rooms during the drill. When instructed, they opened their doors and filed out, with hands raised, while being protected by law enforcement officers.

“Unfortunately in today’s society these types of drills are necessary,” Dr. Wright noted. “You have to be prepared to react. I thought the drill went well; we did see some things we need to improve on.”

He added that administrators from all Hertford County Public Schools attended the training exercise.

“One, it was a great learning experience for my staff to be able to work alongside officers from the other law enforcement agencies in the county plus EMS; when you practice together, you become a more cohesive unit,” Hayes stressed.

“Secondly, what I saw and evaluated was the fact that we need more training on building entry and building searches,” he added.

“All in all it was a great exercise, one where we can take a hard look at our flaws and correct them should a real life event arise,” the Sheriff stated.

“Like any public safety exercise you participate in there’s always room for improvement,” Broglin stated. “It’s through training such as this that helps you prepare for events such as this.

“The biggest thing I noted was communications; anytime you have that many agencies involved your communications system gets overwhelmed,” he added.

Hertford County Emergency Management Director Chris Smith pointed out that the way the local communications system is designed, fire and rescue can use tactical channels, which helps to open up the main communication channels for law enforcement.

“It can still overwhelm the system, especially at the outset of a multi-agency response event like today when everyone is on the same channel at the start,” Smith said.

Smith said Tuesday’s drill was the third one he’s attended in Hertford County over the years.

“We learned how to improve from the first two, and I’m sure there will be some new lessons to learn from this one as well, but that’s what these types of events are meant to do,” he observed. “This one was more involved than the previous two and there were a lot more moving parts.

“My main take away from this exercise is to make sure all our emergency responders have the resources they need to apply to public safety,” he concluded.

“We learned a lot from the training,” said Ahoskie Police Chief Troy Fitzhugh. “It was intense, but improving our skills is the key. We will follow up with some additional training of our own.”

All attending the exercise were present to hone their skills. However, all would be completely satisfied if they never had to answer a call for such a real-life tragedy.

JACKSON – A public hearing on the general topic of Community Development Block Grants (CDBG) was held during the Northampton... read more