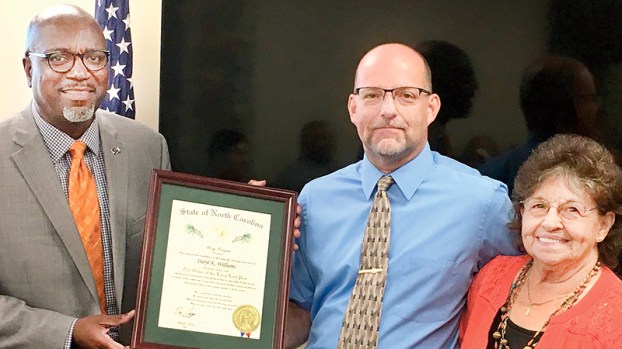 RALEIGH – Over the course of his 30-year career with the North Carolina Department of Corrections, Daryl Williams always strived to, in his words, “do the right thing in the right way.”

That career mantra has earned the Northampton County man one of the highest civilian honors bestowed by the Governor of North Carolina.

Earlier this month, Williams was in the state’s capital city where he awarded The Order of the Long Leaf Pine. First awarded in 1963 by then North Carolina Governor Terry Sanford, “The Order” recognizes citizens for their exemplary service to the State of North Carolina and their communities that is above and beyond the call of duty and which has made a significant impact and strengthened North Carolina.

“When you look at the complete list of those who have received this award, it’s a pretty significant and distinguished group of individuals,” Williams said. “I felt honored just to have my name submitted and nominated for this award….to actually win it is icing on the cake.

“Winning it means as much, or maybe even more, as anything I’ve ever received over my 30-year career,” he added. “You just don’t work 30 years, then retire, and automatically receive this honor.”

Williams, a native of Hyde County, has lived in Northampton County since 1986. Two years after his arrival, he gained employment with the North Carolina Department of Corrections and worked at Caledonia Prison and Odom Prison.

Over the final few years of his long career, Williams served as the Career Readiness Coach at Bertie Correctional Institution in Windsor, a job where he recruited and helped prepare and train the next generation of correctional officers.

Along the way, Williams earned credentials in 1998 as a state certified firearms instructor. He operates Roanoke-Chowan Concealed Carry, a part-time business where he teaches the required course for those seeking to legally and, more importantly, safely carry a concealed weapon.

“I’ve never done anything in my life and expected recognition for it,” Williams noted. “After I reached 20 years in my job, my focus shifted to retirement and the benefits package that comes with that.

“I feel I had a good career with the state; no blemishes on my record and no regrets,” he continued. “So, when my name was submitted for this award and all my career accomplishments it does make you look back and see what you did right.”

As with any job, there are ups and downs. Williams didn’t hesitate when recalling the worst day of his 30 years on the job – April 26, 2017.

“That was the day that (Bertie Correctional Institution Sgt.) Meggan (Callahan) was killed in the line of duty,” Williams said. “In the short time that I knew her, we had become close friends. She came to my office every day for a cup of coffee and some good conversation. She was such a warm, caring officer. Except for that one inmate (who murdered Sgt. Callahan) she didn’t have trouble with any of the others.”

The good days, he said, far outnumbered the bad. Among the good ones was Williams, in his role as a supervisor at Odom Prison, making sure his officers were taken care of. He would often conduct “Correctional Officer Appreciation Day” which would include lunch.

“I remember the days as an officer working the floor where you might get 15-to-20 minutes to eat lunch,” Williams said. “I wanted my guys to experience a real break, one where they could sit down together and enjoy a meal and get their minds off their work.”

When he transitioned over to the position of Career Readiness Coach, Williams found job satisfaction in a different way.

“My biggest satisfaction was, after becoming a lieutenant and then a captain, having an officer come to you and share their thanks for what I had done to help them advance their career,” Williams added.

Williams’ last day on the job was March 1. He received the Order of the Long Leaf Pine in Raleigh on Aug. 8. It was presented by Kenneth Lassiter, Director of Prisons, on behalf of North Carolina Gov. Roy Cooper.

Upon being named to The Order of the Long Leaf Pine, the honoree receives a certificate by which the Governor confers upon the recipient the rank of Ambassador Extraordinary privileged to enjoy fully all rights granted to members of this exalted order among which is the special privilege to propose the following North Carolina Toast in select company anywhere in the free world:

“Here’s to the land of the long leaf pine, the summer land where the sun doth shine, where the weak grow strong and the strong grow great, here’s to “down home”, the Old North State!”