RICH SQUARE – In an effort to bring books to the citizens of Rich Square and the surrounding area, Braxton’s Little Free Library has opened inside of Futrell Pharmacy, located on Main Street in the heart of downtown Rich Square.

The brainchild of Rich Square native Shelia Moses, a noted and award-winning author, the library bears the name of her late grandfather, Braxton Jones.

The library is a bookcase built by Leon Moses of Greensboro, the brother of Sheila Moses.

“The closest library to the people in Rich Square is in Jackson,” said Shelia Moses. “I want people in every town in the county to have a place to go. 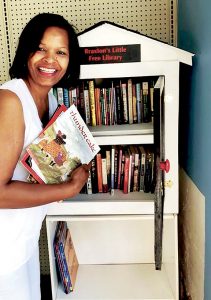 “These books are free,” she continued. “They don’t have to bring them back unless they want to return them and pick out a new book.

“I love the library in Jackson and the people who work there. They support what I am trying to do,” Moses said.

She praised the welcoming spirit of the owners of Futrell Pharmacy for hosting the first-ever Braxton’s Little Free Library.

“Sallie and Bill Futrell did not hesitate one moment to help me get this program started,” Moses remarked. “They allowed me to put the library in their place of business without asking one question. They understood my vision. I am so grateful.”

There are plans to add other locations of Braxton’s Little Free Library.

“The goal is to open a little library in every county,” Moses stated. “Du Dobb’s (Restaurant) in Rich Square will open a library in August and we are working on opening one in Jackson in September.”

Shelia Moses’ latest project is a book about W. S. Creecy High School, titled “A Price Was Paid, The History of W.S. Creecy High School.” The book has been adapted into an exhibit that will open on Oct. 20 at the Northampton Memorial Library in Jackson. A documentary with the same title is in the works.

Copies of that book are available for purchase at mosesbooks.org or at Du Dobb’s Restaurant in Rich Square.