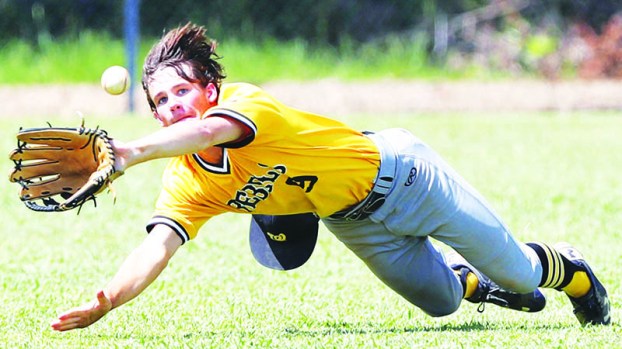 AHOSKIE – They weren’t about to let a piece of history slip away.

Windsor’s junior American Legion baseball team had a chance to cap an undefeated season in Area-1 conference play with the league tournament title here Sunday, but trailing by a couple of runs late, that all looked in jeopardy.

But, as their coach said afterward, they’d seen this scenario before.

One inning after surrendering nine runs to Dare County Post 26 in one of the highest scoring championships games in league history, the Rebels rallied with eight runs of their own to pull out a 16-10 win and put the lid on a 20-0 season. 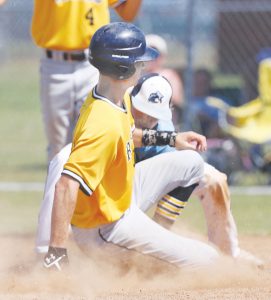 Trenton White, who pitched a two-hit shutout in Thursday’s opening game and went 6-for-13 at the plate in three games, was named as tournament Most-Valuable-Player. In the title tilt he was 3-for-5 and drove in four runs with a double and a triple.

The victory also earned Windsor a trip to the Junior Legion State Championship series beginning Friday in Manteo. Dare County will be the host team and the Hammerheads will be the Area One conference’s other representative.

“We’ve been down before,” said Windsor coach Bobby Harmon. “Not like this, but I told them to just relax and we’d find a way to come back.”

The Rebels, who’d been aggressive in their plate appearances as well as running the base paths, got on the board first in the bottom of the first inning.

White, who reached on an error, went to second base on a passed ball, and then scored from there on Brandon Beach’s screaming line drive down the third base line. It was enough to stake Post 37 to a 1-0 lead after one inning.

Dare County plated an unearned run in the top of the second to knot the game at 1-1 before Windsor scored three in their half of the frame. The Rebels got five consecutive hits – including a pair of doubles – with Cody Stalls, White, and Alden Cottle driving in runs and putting Post 37 ahead 4-1 after two innings of baseball.

Windsor equaled that same number of runs with another trifecta in the bottom of the third thanks to three doubles. Caleb Damo opened with a deep double to centerfield. One out later, Wood Trowell walked. Austin Scott then doubled home Damo, followed by Cody Stalls, who scored pinch-runner Lane Slachta and Scott, with a line drive two-bagger to left field. Windsor’s lead had now grown to 7-1 after three.

Another Rebel run came in the fourth when Cottle singled for his first hit of the tournament. Luther 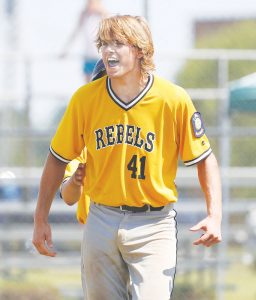 Glover came on to run for Cottle and moved to second on a base-hit by Beach. Caleb Damo followed with an RBI single into the gap in right centerfield, scoring Glover. That made it 8-1, Windsor after four complete.

Windsor made a pitching change after Dare County loaded the bases in the top of the fifth. But that may have been the break the Hammerheads were waiting for as they sent 14 batters to the plate, scoring nine runs on nine hits, and knocking Post 37 back on its heels as Post 26 took a 10-8 lead.

The Rebels got two runners on in the bottom of the fifth, but Dare County got an unassisted first out, and then erased the Windsor threat with the game’s only double-play.

The Hammerheads went in order in the top of the sixth thanks to a spectacular catch by White.

Then came Windsor’s half of the sixth and that’s when Post 37 struck with their highest scoring single inning of the season.

A dozen Rebel batters came to the plate, and Windsor scored in all sorts of ways. Beach scored on an RBI single by Jake Raynor after Damo was hit by a pitch. The Hammers’ pitcher next hit Trowell, who was plucked for the third time in the game; and that loaded the bases with no outs.

Austin Scott lifted a high, deep one to centerfield for an RBI sacrifice fly to tie the game at 10-all. The next play was a wild pitch to Cameron Stevens, scoring Raynor from third for the Windsor lead they would not surrender. After Stevens walked, White solidified the MVP vote with a triple to left. Beach, in his second at-bat of the inning scored the seventh run and the eighth and final Windsor run crossed on an error.

Despite getting a runner on base in the top of the seventh, reliever Stalls got a pair of fly outs and a strikeout to end the game.

Stalls effort earned the win for the Rebels, he pitched the final three innings allowing three hits and two runs while striking out two and walking none. Cottle started and surrendered four runs on two hits over four innings while striking out seven.

Windsor racked up 15 hits. White and Damo had three each with two apiece for Stalls and Beach, and one each for Stevens, Cottle, Raynor, Trowell, and Scott.

“After their big fifth inning, and then they held us scoreless for the first time in the game, I knew we had to step up and that we would,” Harmon said.

“This feels great,” he added. “An undefeated season wasn’t our goal, but it’s a nice feather in our cap. This is one of the finest teams I’ve ever coached.”

According to Legion officials, the 20-0 mark by the Rebels is the first time an Area-1 team has finished the regular season and the tournament undefeated.

Windsor learned after their trophy presentation that they will open at 4pm on Friday, July 20, in the State Tournament in Manteo at Coy Tillett Field against the Area-3 number-2 representative, Randolph County, Post 45. Dare County will play East Carteret, Post 99, Area-2 number-1, on Friday at 7.

Opening ceremonies for the State Tournament will be Thursday evening in Manteo at Tillett Field at 7 pm.

One dies in crash of train and SUV

AHOSKIE – One person was killed and three others injured when an SUV collided with a train near here Sunday... read more