It was Ahoskie’s 13th win of the season.

The Braves opened the scoring with two runs in the top of the first inning. Alden Lassiter reached first base on a dropped third strike. Tyrek Beverly came on to run for Lassiter and stole second base before scoring on a Parker Bradley RBI double. Bradley reached third and scored the game’s second run on a wild pitch. The Wildcats failed to answer in their half of the first and Ahoskie led it 2-0 after one complete inning of baseball. 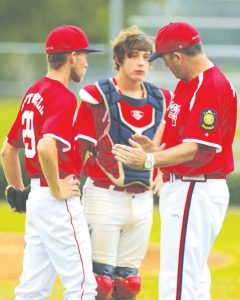 Post 102 got another pair of runs in the top of the third. Trent Hobbs walked and Ethan Hughson reached on an error to get a pair of Braves on base. Hobbs then scored on a Hunter Mitchell RBI groundout with Hughson going to second. After stealing third, Hughson scored on a wild pitch. Again, Albemarle couldn’t get on the scoreboard, and trailed in the game 4-0 after three full innings.

The Wildcats got off the carpet in the bottom of the fourth and cut Ahoskie’s lead to a single run with four runs that made it 4-3, Braves, after four innings.

Ahoskie then blew the game open with six runs in the top of the fifth. Hobbs singled, stole second, and scored on a Bradley RBI base-hit. Bradley went to second on the throw and scored when Hughson got a base-knock. Ahoskie kept up running the basepaths as Hughson stole second and scored when Mitchell drove in Ahoskie’s seventh run. Logan Early and T.J. Lassiter both reached base, Lassiter on a walk that scored Mitchell with the eighth run. Steven Futrell then smacked a two-RBI single scoring Early and Lassiter and Ahoskie had increased their lead to 10-3 after five.

The Braves’ last two runs came in the top of the seventh. Early singled and went to second on a wild pitch. Beverly walked before a sacrifice fly by Travis Williams moved Early to third. Beverly then stole second to get both Ahoskie runners in scoring position and Alden Lassiter delivered both with a two-run single to left field for the 12-3 final.

Ahoskie used four pitchers in the game. Alden Lassiter got the win, while Sam Doughtie, Early and Hughson also pitched. The quartet combined to give up three runs on three hits and they collectively had nine strikeouts.

Ahoskie is now 13-3 and 8-2 in Area-One junior Legion play. They will host Edenton today (Thursday) at Hertford County High Field beginning at 5:30 when they will finish their suspended game with Post 40 that was called after four innings a week ago due to rain. Ahoskie was leading 6-5 after four innings. The regularly scheduled game between the two teams will follow around 7 p.m.