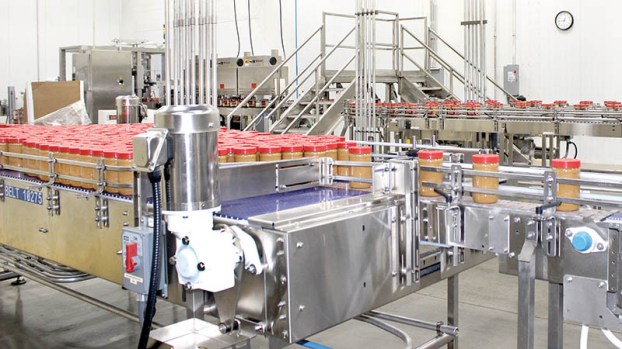 Jars of peanut butter are shown being filled at the Hampton Farms plant located off US 58 in Franklin, VA. | Staff Photos by Stephen H. Cowles

At the time, Hampton Farms said it would bring 60 new jobs at an average salary of $33,400. Where the plant is located is a revenue-sharing zone between Southampton County and Franklin. An estimated $841,517 in tax revenue over 10 years will be shared between the two localities.

For those area residents and officials who accepted the invitation to the event, a rare tour was also featured. Employees led a few small groups at staggered times to witness the process. Visitors saw where and how the peanuts are roasted and blanched before liquified just enough to fill the seemingly never-ending procession of clear plastic jars. Those containers are stacked on pallets reaching high in the air. 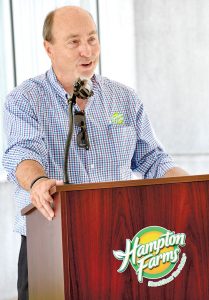 Hampton Farms President Dallas Barnes of Severn makes remarks on Friday during the dedication of the peanut butter plant.

The filling of each jar seemed to take less than a minute, and the labeling in the blink of an eye. Clear sleeves group two jars at a time, which are collected into boxes. A large robotic arm lifts and stacks onto pallets eight layers deep. These are then secured with strong green plastic ribbons and clear plastic sheeting before a forklift carries them away for storage or shipping.

Following the tour, Hampton Farms President Dallas Barnes told the audience he was honored by their presence for the dedication. He praised the employees in saying, “Without people, this place doesn’t run.”

Hampton Farms remains a family-owned descendent of Severn Peanut Company, a Northampton County, NC firm that dates back over a half century to the mid -1940s and, along with Meherrin Agriculture, now the parent company, coordinates closely with farmers who actually produce the crop.

Southampton County Supervisor and farmer Bruce Phillips, who was among the supervisors present on the tour, happened to mention that he is one of the company’s suppliers of peanuts.

Barnes noted the nutritional value of peanut butter, such as having eight grams of protein in just two tablespoons. He pointed out the product’s ability to satisfy an appetite better than popcorn or other snacks, as well as being an economical source of nutrition.

Quoting the mission statement, “To be the best nut company of today,” Barnes said the company still has a long way to go.

Joe Dundalow, responsible for the plant design, was presented a plaque of appreciation.

“What a pleasure it is to watch the plant grow,” she said.

Washington also urged all employees to “find joy in your job.”

(Stephen Cowles is a Staff Writer for the Tidewater News in Franklin, VA, a sister publication of the Roanoke-Chowan News-Herald.)

Submitted by P. Michelle Felton Scattered through the corn, tobacco and soybean fields, at the crossroads of Highway 258, lie... read more