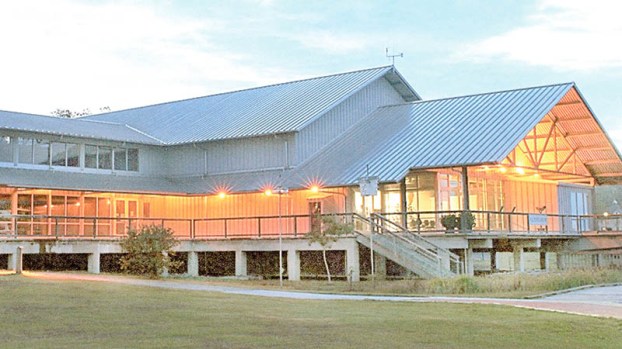 Shown here is an architectural drawing of the proposed joint-use facility that will become the new home of the Bertie Library and Bertie County Cooperative Extension.

WINDSOR – At their May 7 meeting the Bertie County Commissioners heard of four potential sites for the new Bertie County Library and Cooperative Extension Service joint facility.

Nearly two weeks later, plans are underway to complete a land acquisition with the purchase of an eight acre tract off US-17 north of Windsor at South King Street and Lancaster Avenue.

In December of last year, the Golden Leaf Foundation’s Board of Directors announced disaster recovery funds in the amount of $2,750,000 for the library and cooperative extension joint use facility. That, in addition to the $500,000 grant pledged by Golden Leaf in June of last year for use in support of planning, engineering and designing the facility.

Those funds were part of a disaster recovery package from several agencies to help Bertie County and the town of Windsor recover from the flooding damage caused by Hurricane Matthew in October of 2016.

“We talked about a couple of sites earlier,” said Bertie County Manager Scott Sauer at the May meeting. “One was at Granville Street around the corner from the (Martin) Community College site; and while contact was made with the owner it looked like there was very little flexibility in their asking price which made it cost prohibitive.

“Then there was another site on the ‘hospital side of town’ adjoining a piece of property the county already owns along Jasper Bazemore Drive; two small tracts that could be combined to make it a three acre tract, but the owner was not interested in selling,” Sauer continued.

The County Manager then revealed he had been contacted by an out-of-town landowner who owned a tract of land right across from the site of the proposed teacher housing complex.

“It’s a wooded lot located on high ground out of the flood plain at the corner of South King Street and Lancaster,” Sauer noted. “It’s kind of hard to visualize right now because of the trees.”

The final site under possible consideration was near the old county Department of Social Services building area, also located off US 17 and presently owned by the county.

In the 10 days since that meeting, Bertie Commissioner John Trent went to work setting up a meeting with the interested out-of-town landowners, discussing the idea of acquiring a portion of this land for construction of the library and cooperative extension offices.

The owner, M-and-M Land Development, Inc., had more good news for the county. The owner informed the county they propose selling four acres to the county, and developing the remaining four-acre portion of the site into a two-building 48-unit apartment complex with a shared parking area at this site.

Trent went on to acknowledge that the owner has held this investment property for 10 years with the intent to build multi-family housing; and the property is already zoned for such housing according to Windsor Town Manager Allen Castelloe.

On May 16, after meeting with the owners, Trent received verbal and text confirmation that the county has been offered four (4.0) acres for purchase at the Lancaster and King Street site at an asking price of $20,000 per acre ($80,000 total).

The property owner did indicate they desired the county to take the lead on this project by covering the costs for survey work, legal work, and administration of the subdivision process that would be necessary.

“The county will need to evaluate the site and consider which portion best fits the program needs for the library and cooperative extension service,” Sauer said.

Designs for the dual-purpose facility have already been submitted and Sauer says he anticipates that plans are already in motion to begin immediately with preparation of a work order proposal for the necessary tasks.

“I want to thank Commissioner Trent, County Manager Sauer, and all other county staffers who have worked to make this project a priority,” Bazemore said via conference call. “This effort will benefit the county in so many ways, and I am grateful that all involved have moved swiftly to bring it to fruition.”

WINDSOR – We all know about the brave words of some of our bravest cancer fighters. Most recently, it was... read more