Mr. Lewis attended North Duplin High School and graduated from King University. He served as an officer in the United States Marine Corps before having a career in business. He was a member of First Presbyterian Church in Dunn, NC where he served as an Elder and was also a member of the Rotary Club and the American Legion. 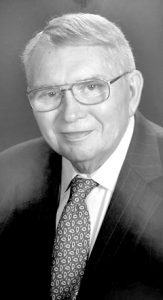 A funeral service will be held 2:30 p.m. on Wednesday, May 9, 2018 at the First Presbyterian Church of Dunn with Rev. Howard Dudley and Dr. Timothy Reaves officiating.

Burial will follow at 4:30 p.m. at the Calypso Cemetery in Calypso.

Arrangements are by Skinner & Smith Funeral Home of Dunn.

LASKER – Gene Barrown Bridgers, a native of Northampton County, passed away Saturday, May 5, 2018 at his home surrounded... read more