AHOSKIE – Hertford County pound out 13 hits en route to a 7-4 Northeastern Coastal Conference baseball win over Pasquotank County High here Friday night, and with the win maintained a tie at 4-0 for first place in the league with First Flight and Currituck County.

The Bears opened the scoring with three runs in the bottom of the second inning. Trent Munford singled and stole second before scoring the first run on a Harrison Spence RBI single to centerfield.  Spence would score on Parker Bradley’s RBI double to left field and then score for himself on Jaylan White’s base-hit, also to left field.  It was 3-0, Hertford County.

Pasquotank, whose head coach is former Hertford County baseball standout Brandon Matthews, scored a run in the top of the third to trail 3-1. 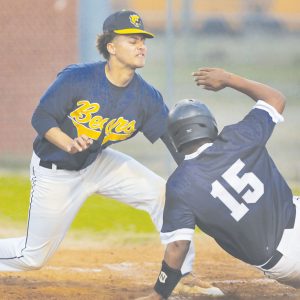 Hertford County High’s Trevor Lee (left) applies a successful tag at home plate to get the out against Pasquotank runner Kamari Spencer (#15) in Friday’s game in Ahoskie. The Bears won 7-4 to raise their record to 4-0 in conference play. | William Anthony Photography

Hertford County added two more runs in the bottom of that inning when Evan Lassiter reached on a single to left and eventually went to third base on Trevor Lee’s sacrifice fly. He would score on Spence’s second RBI of the game, an infield single, while Spence would score on Parker Bradley’s second run-batted-in, a run-scoring single to centerfield. The Bears were now ahead 5-1 after three complete.

But Pasquotank wouldn’t quit. The Panthers scored three runs in the top of the fifth inning to make it a one-run game after four-and-a-half innings, 5-4.

In the bottom of the frame the Bears added another run.  Spence walked, went to second on a groundout and scored on Parker Bradley’s third RBI of the night, a single to left field that made it 6-4, Hertford County.

The Bears added an insurance run in the bottom of the sixth when Tyrek Beverly singled, stole second, and scored on Evan Lassiter’s RBI to center. It gave Hertford County a three-run margin at 7-4.

Pasquotank produced a two-out walk in the top of the seventh, but a strikeout ended the Panthers’ final threat.

Trevor Lee pitched four innings for the win – his fourth of the season. He allowed two runs on six hits and had six strikeouts.  Parker Bradley pitched an inning and allowed two runs, and Alden Lassiter got the save with two innings of shutout baseball on one hit and four strikeouts.

Evan Lassiter and Parker Bradley led the ‘hit parade’ with three smacks apiece. Beverly and Spence had two hits each, while Cameron Lassiter, Munford, and White had one hit each.

It was Hertford County’s fifth straight win and seventh in their last eight tries, improving their mark to within a game of .500 at 7-8, while remaining unbeaten in the conference.

That lead will be tested tonight (Tuesday) when Hertford County travels to Kill Devil Hills to meet 4-0 First Flight for a 7 p.m. contest.