WINTON – It was a typical day mid-January day for Hertford County EMTs Casey Minton and Austin Bradley as they answered a few calls for a variety of medical ailments.

Then came a call for a woman in labor. The duo arrived quickly to pick-up the pregnant patient and were just a few blocks from arriving at Vidant Roanoke-Chowan Hospital when the baby decided it was time to enter the world….as in right now!!

“Austin was driving the ambulance and I was attending to the woman in the back,” Minton recalled. “When I realized that the baby was coming quicker than first expected, I hollered at Austin to pull over to the side of the street and come to assist me.”

Following their training to the exact letter, the two EMTs experienced a first in their lives – delivering a healthy baby boy. 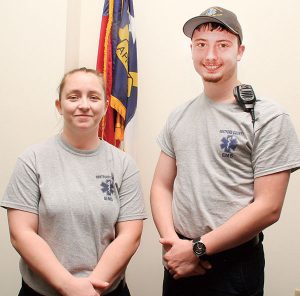 Hertford County Emergency Medical Technicians Casey Minton and Austin Bradley were praised by county officials for their efforts to bring a new life into the world. | Staff Photo by Cal Bryant

For their efforts, the duo was recognized during Monday’s regularly scheduled meeting of the Hertford County Board of Commissioners.

“I’m sure they would have preferred making it all they way to the hospital, but they followed the medical protocol upon learning that the baby was about to be born,” said Hertford County Human Resources Manager Keri Askew upon presenting Minton and Bradley to the commissioners for recognition.

“It’s a very rare occasion when our Emergency Medical Services staff has to deliver a baby; they haven’t had such a case in the last eight years,” Askew noted. “Their training kicked in and everything went smoothly with the delivery.”

Askew then presented both EMTs with an official “stork” lapel pin.

“It was a very unique experience,” Bradley replied.

“It’s something you will never forget,” Freeman added. “You two represent the type of employees the county wants; you definitely take your jobs very seriously and you are well trained. You are the ones who make this county look good and I encourage you both to keep up the good work that you do.”

“We congratulate you on the jobs you do, day in and day out,” said Commissioner Bill Mitchell. “I will always tip my hat to our hard-working EMTs. I’m the type that will pass out at just the sight of blood. I’m grateful to know that you’re on duty to answer calls for medical assistance.”

“You two got yourselves into a very rare situation and it sounds like you both handled it extremely well,” stated Commissioner Johnnie Ray Farmer. “That makes us proud to call you Hertford County employees.”

At the close of the meeting, Minton and Bradley talked more about that January day.

“When a baby decides it’s time, then there’s nothing else you can do other than do what you’re trained to do,” Bradley told the Roanoke-Chowan News-Herald.

“Everything was normal until we got about two blocks from the hospital,” explained Minton. “I wasn’t expecting the mother to go into such an intense labor, but when she did we had no other choice at that time but to stop and deliver the baby.”

Minton has been an EMT since 2009. Bradley gained his EMT certification nearly two years ago, but had training as a Junior EMT since the age of 15.