That’s what Bertie County wants in the upcoming 2020 census, and to help insure it they’ve contracted the Mid-East Commission (MEC) to assist in making certain the county’s population count is its most accurate.

Monday, at the March meeting of the Bertie County Commissioners, Mid-East Commission Executive Director Bryant Buck appeared before the Board to offer assistance from his group to insure the integrity of the county’s 2020 census data. 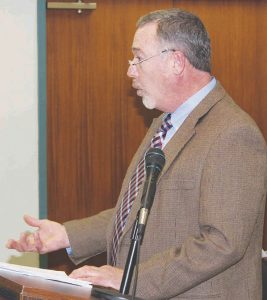 Mid-East Commission Executive Director Bryant Buck addresses the Bertie County Commissioners at their March 12 meeting with a proposal he thinks will aid in 2020 census-taking accuracy for the county.

According to the NC Office of State Management and Budget the US Constitution requires a census be conducted every 10 years. While the specific purpose of the census is to apportion seats in the U.S. House of Representatives, data reported by the census has many uses, including over 1,000 grant programs offered by some 26 federal government agencies. Most of these programs distribute funds based on formulas that use census data.

“Two years ago when I was planner at the Mid-East Commission I had concerns about the census numbers,” Buck began. “The county had tried to apply for various grants, to receive funding; and unfortunately, certain areas that we know from living in the county that were low-to-moderate income were not showing up on the census records. If an area of census tract does not meet certain criteria, then you don’t qualify for that grant, or even to apply for that grant.”

Buck said he had discussed some of the issues with Commissioner Ron Wesson seeking solutions; often showing their data with known discrepancies to the Census Bureau.

Buck said two years prior to the census, the bureau rolls out the Local Update of Census Addresses, or LUCA, program; and, to coordinate, they have been working closely with the county tax, mapping, and planning departments over the past month.

“The way it works, the Census Bureau sends its data to us, we review it, compare it to what the county has on record, and then we try to fill in any gaps,” Buck said. “We hope through the LUCA program that we can rectify some of these issues. We don’t use their data to come back and correct our data, but rather the opposite.”

Buck said the old system of using paper maps – the blueprint kind used for zoning – digitizing them, and then inserting zoning layers are outdated.

“Nobody’s fault, it’s just the way things were done initially,” he said. “You make a slip of a pen and there’s an error, and that error compounds over the years.”

Buck said the old maps accounted for many of the errors. They’ve since moved to a system where they incorporate the paper maps (showing parcels) and then use the data (names, addresses) to correspond with each other. This, he said, has updated the integrity to at least 2017.

While he complimented the county mapping office for keeping up to date, he said the quality check on the initial data could be reviewed much closer. Using satellite imaging, he says they’ve been able to identify new homes, wrongly identified structures, and other errors that have simply been transferred along with updates.

Buck said the MEC now suggests taking the existing data, go through every address point and parcel layer, and rectify the data.

“Who does this help,” he asked. “(It helps) our E911 and other first responders, our tax folks, and anyone else for whom the information is very beneficial moving forward. The data is also used to determine eligibility for federal dollars.”

To assist the county in the LUCA operation, Buck proposed a trio of packages using certified, professional geographic information system (GIS) staff for the project: a minimum update package, a partial update package, and a complete update package. He recommended the complete package, consisting of:

A current address points shapefile (needed for the LUCA operation) has not been updated in years and has many errors, including a complete update of Bertie County’s address points.

A point for each addressed structure in the county.

Removal of address points where structures do not exist.

Adding address points that are not accounted for.

Adding metadata to each address point (with owner name, physical address, mailing address, structure type, XY location, latitude and longitude, and so forth.)

This package also includes a complete update of addresses for the LUCA program (approximately 10,000 addresses in total), and staff will verify every address for accuracy, ensuring completely accurate data for the LUCA update.

Buck stated the total cost for this option is $17,500, and the amount could be split over two fiscal years if desired.

“It’ll be about 350 hours, approximately, to accomplish this task,” he stated. “We prefer it because it puts the county at a level base, because we know the data as of 2018 is accurate.”

Board vice-chair Ron Wesson said he, Chairman Ernestine Byrd Bazemore, and County Manager Scott Sauer had attended the census meeting and spoke to the importance of accuracy.

The Commissioners seemed to nod in agreement of wanting one of the three options.

“I think it’s great,” said Commissioner Tammy Lee. “It’s too important not to go with the best option.”

“Every person that we miss in this county, the value of that loss is $1,600 per person,” Wesson acknowledged. “Imagine missing one group-home with 10 people, that’s $16,000, and then compound that over 10 years it would be $160,000 just for a missed count. For a mobile home park you don’t count the mobile homes, you could the mobile home slots; then there’s the prison count. You see it hurts us in federal dollars and in county ranking. Economically, this is very important.”

Wesson said the current Board had moved Bertie’s ranking up every year, and that it could take a significant leap up with a truly accurate census count.

Commissioner John Trent made a motion to accept the complete package, seconded by Wesson, and the Board passed it unanimously.

WINDSOR – As much as Barry McGlone loved working as a public servant in Bertie County – first as a... read more