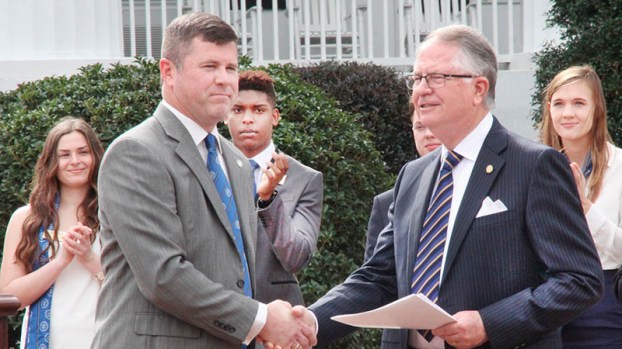 MURFREESBORO – Chowan University’s new president didn’t have to use an electronic navigational device to find his way to the Murfreesboro campus.

He’s been there before.

Thursday morning. Dr. Kirk E. Peterson was formally introduced as the 23rd president in Chowan’s storied 170-year history. As of June 1, he will take the reins from current Chowan President Dr. Chris White, who will transition over to the role of Chancellor. That move was announced last year. 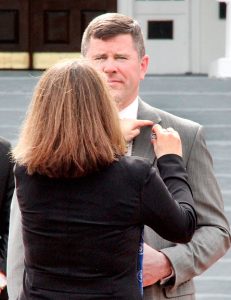 “I was telling Rachel (his wife) as we were driving in for today’s event that this felt right; we’re back home,” Peterson said during an exclusive interview with the Roanoke-Chowan News-Herald just prior to the official announcement made before a large gathering of students, staff, Chowan officials and community members gathered near the front entrance of the historic Columns Building.

“I worked at Chowan from 2004 to 2010; Rachel worked here at the Whitaker Library; and one of our three sons was born here….this is home for all of us,” Peterson added.

During his previous stint at Chowan, Peterson served as Assistant to the Provost and Chairman of what is now the Sports Studies and Physical Education Department.

“Back then we lived in a dorm here for a couple of months before finding a house,” he recalled. “Chowan was going through some tough times back then, but just look at her now. Dr. White and his staff have done a remarkable job in the resurgence of Chowan University.”

Peterson, who will celebrate his 46th birthday on Feb. 18, spoke of the loyalty of staff members who stuck it out during the lean years.

“The devotion they have for this great university tells me all I need to know that accepting this job is right for me,” Peterson remarked. “Some of my former students here are now working for Chowan, so when Dr. White presented the opportunity to me to apply for the position, it was amazing to think I could come back here to this great institution.”

He returns to Murfreesboro from Ohio. There he first served as a Senior Vice President, Interim President, and President of Urbana University. After leaving Urbana, Peterson has served the last four years as the Superintendent of Springfield Christian School and Immanuel Christian Academy, located in Springfield, Ohio. 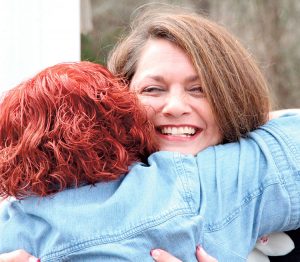 “In higher education, they always tell you to move up you have to move on,” Peterson noted. “When I was first here at Chowan, Dr. White asked me did I one day want to become a college president, to which I answered yes sir. He said we need to get you on to the next position, which then became the Vice President of Academic Affairs and Provost at Urbana.”

Still, the thought of returning to Murfreesboro was in the back of his mind.

“Some of the faculty at Urbana asked me where was the next university I’ll be, and I told them Chowan,” Peterson said. “Did I think at that time it would be in the capacity of president…well, no, but I knew I would one day come back as this is home. Now, with this opportunity, I’m so humbled. I’m coming back to a place I deeply love and I’m ready to serve.”

Peterson said his job at Chowan is to continue to build upon what Dr. White began.

“No one can replace a man such as Chris White; all I can do is continue his legacy, his vision for this great university, and I get the chance to work with him before he fully retires,” he stressed.

“What he’s done to the physical plant here is nothing short of amazing,” Peterson continued. “He has always been a firm believer that the look and feel of a campus is what helps attract students. And the thing is it’s not just Dr. White who believes that, everybody here believes that; it’s been a roll-up-your-sleeves mentality here about keeping this institution thriving and growing.”

The diversity of Chowan’s students is another key drawing card for the university.

“Chowan mirrors the world in which we now live with its diverse student population as well as members of the staff. I can easily see us growing that to another level,” Peterson said.

Another element that drew Peterson and his family back to Chowan is the university’s strong religious faith.

“The cornerstone of this institution was built on Jesus Christ,” he stressed. “That part made it extremely attractive to bring my family into that type of environment. Knowing we can be a part of a Christian institution that’s growing and thriving made my decision to come back so much easier.”

Peterson said that part of his vision for Chowan is to continue the effort to recruit and retain students as well as growing and improving the physical plant. He stated a desire to work with the faculty to bring in innovative academic programs, and work closely with the students to gauge their feelings and listen to their needs.

In introducing Peterson to the public, Frank Rose, Chair of the Board of Trustees, stated, “Dr. Peterson’s academic credentials are impeccable. He is a man of faith and integrity. He knows Chowan and her students. He believes in Chowan’s mission and values. He is a proven leader.”

Dr. White, in his remarks, said he strongly believes Dr. Peterson is the “right man at the right time.”

“I commend the trustees on their wisdom in the selection process,” said Dr. White. “I highly commend the new president. If the past is the prologue to the future, he will lead Chowan to unprecedented heights. I believe he is God’s chosen leader for this time in Chowan’s history.”