GREENVILLE – From the moment he read about Brandon Hodges’ need for a kidney donor, Mike Ward sensed he was the one.

Now that tests have confirmed that Ward is a match, the two longtime friends will head to Vidant Medical Center on Feb. 6 for a procedure that will change the course of both of their lives.

“To be a living donor to Brandon was an easy decision for me,” Ward said Monday morning. “I don’t know if I could have made that decision giving it to an unknown, which people obviously do. … I don’t know if I was to that point, but going right back to the beginning and I read that article, God said, ‘This is your calling, and you’re going to do this.’ I said, ‘All right, let’s go.’” 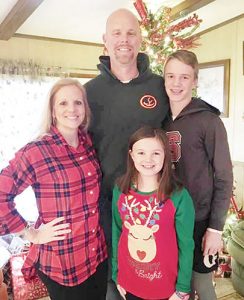 Brandon Hodges, his wife, Anna, and their two children.

Since the age of 14, Hodges – a native of Hertford County where he played and coached baseball – has known he has IgA nephritis, which occurs when the immunoglobulin A (IgA) antibody lodges in the kidneys, resulting in inflammation that eventually hampers the kidneys’ ability to filter wastes from blood.

Few people knew of Hodges’ condition, and he experienced no symptoms until some unexplained bouts of fatigue early last year. Tests revealed his kidney function fluctuating between 12 percent and 16 percent, on the edge of stage-five kidney disease.

A transplant is the only chance for the 42-year-old father of two and coach at The Oakwood School of Greenville to maintain his quality of life. Ward is providing that chance.

“It takes a selfless, courageous individual to want to help somebody like Mike’s doing,” Hodges said. “It just shows you how good God is, and it just shows you … that there’s still good people in the world.”

Although the two men have been friends for more than 15 years, played on the same softball team and had sons in Greenville Little League at the same time, Ward never knew Hodges had a rare kidney disease. He found out last November when he checked his Facebook page — something he had been avoiding “because I just didn’t like what Facebook had become” — and saw about Hodges’ quest for a kidney donor.

“I read it, and it blew me away like it did I’m sure it did everybody else that had no idea what he had going on,” Ward said. “After reading it, that was the moment I knew that God placed in my heart, ‘Mike, you’ve got to do this. You’re a match.’”

Ward knew he and Hodges were the same age with roughly the same height and weight. Since he was a blood donor, he called the Red Cross to see if his blood type — it matched Hodges’ A-positive.

“Right then I knew that it was me,” Ward said.

He didn’t immediately call Duke Medical Center, where Hodges initially planned to have the transplant, to inquire about testing. Ward first called Hodges.

“He said he felt God tugging on him and telling him that he needed to try to help, that he thought he was a match,” Ward said. “When he called me, he told me, ‘Brandon, I’m telling you, God’s told me I’m the one.’ I’m going to be your kidney donor.’ Lo and behold he was right.”

A couple of months passed before there was confirmation. Potential donors ran into roadblocks at Duke because insurance would not pay for testing. A GoFundMe page raised $10,615 and other fundraisers sought to provide support, but Vidant Medical Center contacted Hodges and told him a pool of funds was available if he had his transplant in Greenville.

When Ward found out, he arranged for testing.

“I didn’t call Brandon this time,” he said. ”I called Vidant like I was supposed to.”

Ward underwent a series of tests and an interview but never doubted the outcome.

“I told them all, ‘I understand that this is part of your procedure, but it’s gonna be me. I can save you guys a lot of work. Just go ahead and put it in as me,’” he said. 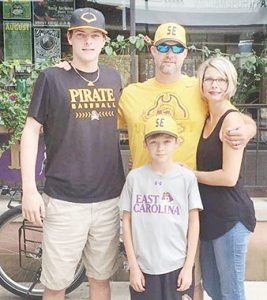 Mike Ward and wife, Wendy, with their children. Mike has donated one of his healthy kidneys to save Brandon’s life.

Vidant transplant coordinator Karen Malagrino informed Hodges before Ward had the chance. Hodges was on the way to Next Level Training Center about 5:30 p.m. Jan. 24 when his cell phone rang.

“Being a daddy you try to be tough for your kids,” Hodges said, explaining that he tried not to cry. “I had a truck full. I just felt overwhelmed, relieved and just was excited that it happened so fast.”

Hodges and Ward have talked several times since.

“The first thing he said to me was, ‘You’re saving my life.’ That kind of took me aback,” Ward said. “Once you start thinking about the grand scheme of things, yes I am, I’m giving him a better quality of life. But I have two kidneys that work and work well. It’s been proven throughout the years that you can function well and live a healthy, extended life with one kidney. It would be selfish of me to keep both and not help a friend out, especially someone like Brandon.

“I’m not one that likes attention,” he said. “I kind of like to have my own hermit kind of deal, but I’m starting to understand more and more the magnitude of what it is that I’m doing. In my mind, it’s a friend helping a friend, but it’s obviously so much more than that. It’s a friend saving another friend’s life.”

Even a recent trip to a Chinese restaurant in Washington served to reassure him. Although he doesn’t believe in the power of the message on the little slips of paper inside fortune cookies — or even coincidences — he couldn’t help but smile.

“I haven’t had a fortune cookie in two, three, four years, and half the time I just throw them away,” he said. “I opened the fortune cookie and it says, ‘You want to do a favor for someone.’ Out of all the fortune cookies in that box, and that day I happened to get one. … To have that message that just reaffirmed that ‘You’re the guy. You’re supposed to be doing this.’”

(This story was published with the permission of its author, Mike Grizzard.)