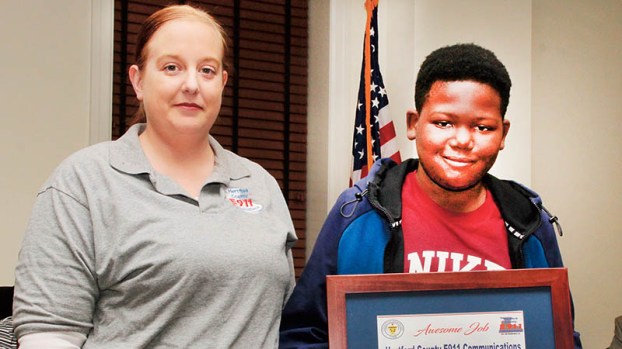 WINTON – Does your child know what to do in the event of a house fire?

If not, they need to take a lesson from Ay’Mariyon Moore, a 10-year-old who drew praise after calmly handling what could have been a tragedy at his grandmother’s residence.

At Tuesday’s meeting of the Hertford County Board of Commissioners, Moore was recognized and presented a framed certificate honoring his actions.

David Brown, Hertford County’s Director of E911 Communications, told the commissioners that Moore was at the home of his grandmother, who resides on Ahoskie-Cofield Road, on Dec. 19. It was shortly after 1 p.m. when the stove in his grandmother’s kitchen caught on fire.

“Ay’Mariyon grabbed his cell phone and went outside to call 9-1-1 to let us know that his grandmother’s house was about to catch on fire,” Brown said.

Through a laptop computer, Brown played the 911 call made by Moore that day. It was extremely clear listening to the young man’s voice that he didn’t panic and was able to answer all questions, in a calm manner, posed to him by the E911 dispatcher.

“There’s a fire at 508 Ahoskie-Cofield Road,” Moore is heard on the recording.

When asked what was on fire, he stated it was an oven.

“Do you see smoke and flames,” asked the dispatcher, to which Moore politely responded, “yes mam.”

The dispatcher, after paging out fire and rescue units to be en route to the scene, wanted to make sure of the safety of anyone in the home.

“Is there anybody there with you,” quizzed the dispatcher.

“Are you all able to get outside of the house safely,” asked the dispatcher.

The dispatcher asked for the caller’s first and last name and phone number, which the 10-year-old immediately gave.

“As you can tell by listening to that 911 call, Ay’Mariyon was very articulate; he was very well spoken; and was very polite,” said Brown. “We were so impressed by his actions that we wanted to recognize this young man.”

Brown got in contact with Moore’s grandmother and other family members.

“They were all extended an invitation to be here tonight and as you can see they’re here in full force,” Brown noted.

Martha Comer, Shift Supervisor for Hertford County E911 and the dispatcher on duty Dec. 19 and handled the call, presented Moore with the certificate.

“He did an awesome job,” stated Comer.

Moore, who humbly stood quiet and still during the presentation, was all smiles when handed the certificate.

“To all the family members of this young man, you are to be commended on how you raised your child,” remarked Commissioner Johnnie Ray Farmer as the presentation came to a close.

WINTON – In advance of what may prove as an emotionally-charged public hearing next week in Edenton, the Hertford County... read more