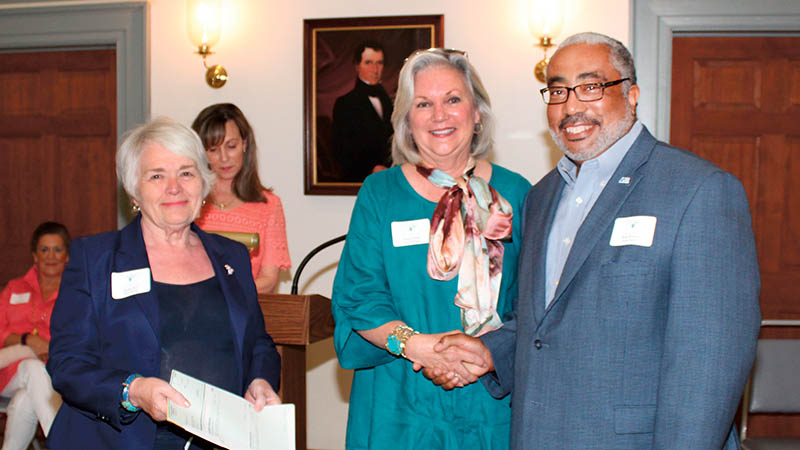 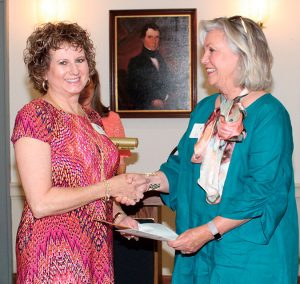 Five different non-profit organizations were awarded money from both Foundations along with one local student who received the M.C. Ashe Scholarship, culminating in over $11,000 received in total to help benefit residents of these two counties.

President Laura Beasley welcomed the crowd and expressed her appreciation for everyone working together with both the Bertie-Hertford Community Foundation and the Bertie Hertford Women’s Fund.

Before the presentations were made, Leslie Ann Jackson addressed the attendees on the topic of impacting a community through funding. Jackson is the Director of Grants and Scholarships for the North Carolina Community Foundation, the parent group of the Bertie-Hertford organization.

“‘Impact’ is a word we talk about so much,” Jackson began in her remarks.

She continued on, recalling a quote she’d heard once that compared community foundations to pinch hitters in baseball. The nonprofits and other organizations essentially get the bases loaded, and then money from the foundation “sends them to home plate” and gets them to their goal.

“We couldn’t do what we do without you. And without you, we would have nothing to do,” Jackson concluded, giving credit to the impact of the local Foundation and how they work solely to benefit others.

Youth Bertie Backpacks, a program that currently helps feed over 150 kids within the county, received $1,500. The award was accepted by Karen Ray and Ron Wesson, who both helped found the program a few years ago.

“We’re so delighted to have a positive impact,” Wesson said, citing the need to fight hunger in the area.

$2,000 was awarded to the Roanoke Chowan Christian Women’s Job Corps, and was accepted by Debbie Vinson.

“We help train women who want to get a ‘leg up,’” Vinson explained, adding that they’ve already helped 120 women to date.

Richard ‘Dickie’ Hoggard accepted $2,240 on behalf of the Ahoskie Food Pantry, and he expressed his gratitude for the Foundation’s support to their organization.

Bertie County’s Cooperative Extension received $1,000 to help students in the 4H program attend summer camp. Sheila Powell accepted the grant, mentioning how excited the children were to have this financial assistance.

After the grants were given out, Austine Evans, the Foundation’s Scholarship Chair, presented the M.C. Ashe Family Scholarship. Evans explained that Ashe was a former high school teacher and counselor at Hertford 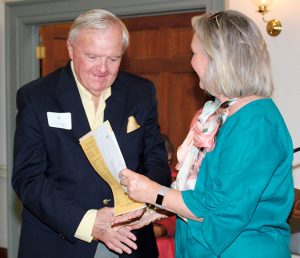 Penny Rose presents a $2,240 grant to Richard ‘Dickie’ Hoggard on behalf of the Ahoskie Food Pantry.

County High School who desired to do something for local children even after he retired. The scholarship, created in the early 2000’s, is designated for a graduate from Hertford or Northampton County who plans to attain a degree in teaching or a science field.

This year’s scholarship recipient is Kaisi Peele, a Hertford County High School graduate who will attend North Carolina A&T in the fall to pursue a degree in Biology (pre-med). Her goal is to become an anesthesiologist.

Peele’s parents said they were very proud their daughter received the Ashe scholarship. Coincidentally, they both had Ashe as a teacher and counselor when they were students themselves.

The Bertie-Hertford Community Foundation is run by a 12 member board of directors, all from the local area. The Foundation, established in 1999, makes charitable contributions to support the local community through a variety of endowments, grants, and scholarships.