NEW YORK, NY – It’s a long way from the rural back roads of Gates County to the glitz and glamor of a national awards show held in New York City.

However, John A. Ward II has made that transition, without forgetting his roots.

Last month, Ward – the son of the late Joan and John Ward of Corapeake and a 1987 graduate of Gates County High School – collected his 12th Sports Emmy Award during a ceremony held at the Jazz at Lincoln Center’s Frederick P. Rose Hall in New York City. 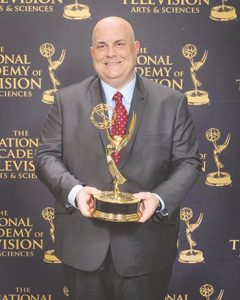 Ward, now a Senior Vice President for content operations with the AT&T Entertainment Group, and his crew won in the category of Technical Achievement due to their outstanding 4K coverage of Major League Baseball during the 2016 season.

“This one is special because it’s a tip of the cap to the latest technology – UHD, or Ultra High Definition also referred to as 4K,” said Ward.  It’s four times the resolution of HD.  I truly feel that this is the UVD – or unique visual difference – that all broadcasters are trying to give to their customers. Seeing is believing – especially with live sports action.

“I have spent my career working with live sports coverage and to be able to work with these high resolution images with America’s Pastime has been very rewarding,” Ward added. “The last year with the AT&T acquisition of DIRECTV and their push to transmit 4K signals to our customers has been some of the best work projects I have ever been involved in. I could not be happier.”

After high school and college (one year at Chowan University and graduating in 1991 from NC State with a degree in radio/TV/film), Ward found a lifelong mentor in another Gates County native, TV/movie producer Beth Polson. He moved to Los Angeles.

“I would not be where I am today in my career had it not been for Beth,” Ward said.

His first big break came in 1993 when he was hired by a fledging new TV network – Fox. While with Fox, Ward branched out to perform some freelance work, first with Pat O’Brien, formerly with CBS Sports.

That sports connection led Ward to his next big step up the ladder – the NFL, of which Fox acquired a portion of the broadcast rights. It was O’Brien’s recommendation of Ward to a Fox Sports producer that sent him to the next level.

Not too long after Fox launched its NFL coverage, Ward formed a bond with David Hill, the right-hand man of legendary Fox founder Rupert Murdock. In 2000, Hill gave Ward his first big test, sending him to England to oversee the start-up of NFL Europe.

Upon his return to the United States, Hill sent Ward out on another project, one that would land him back in the Tar Heel State where Fox wanted to develop a NASCAR channel based in Charlotte. Ten months later the SPEED Channel was up and running.

That same year he worked on the road as a Technical Producer for NFL coverage, working with Joe Buck, Troy Aikman and Chris Collingsworth. He went on to work three Super Bowls, 10 World Series, four Stanley Cup finals, and multiple Daytona 500s during his 12 years with Fox Sports where he moved from Broadcast Associate to Production Supervisor to Director of Production.

He won 11 Emmy Awards for his work on NFL, MLB and NASCAR events during his time with Fox.

When Murdock purchased DIRECTV, Inc. in 2004, one of the most logical choices to move that new acquisition forward was Ward. His work there began in 2005 to start-up an original entertainment division.

“We built our HD (High Definition) studios to start produce our programming, which included NFL Sunday Ticket and the 101 Network, a 24/7 entertainment channel. Ward said.

“What I hear a lot when I talk to people about having grown up in a small area is that I’m constantly reminded about how lucky I was to have that type of upbringing,” Ward added. “I wouldn’t trade growing up in Gates County for anything. The core values and beliefs instilled in you from an early age can carry you throughout life. It’s kind of the same way in the business world, you treat people around you right and they will remember that. If you carry yourself that way, you’ll never go wrong.”

Ward and his wife currently reside in Santa Rosa, CA.