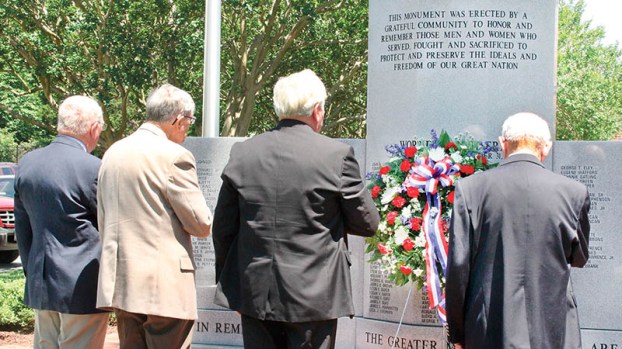 From left, Murfreesboro war veterans Lamar Van Brackle, Brinson Paul, David Farnham and Joe Dickerson pause for a moment of silence after laying a wreath at the base of the Murfreesboro Veterans Memorial on Monday morning. | Photos by Cal Bryant

MURFREESBORO – From Bunker Hill to Afghanistan, the battlefields were once, and still are, stained with the blood of American military men and women.

All was quiet on the Murfreesboro “front” on a sunny and breezy Monday morning…all except for the sound of U.S. Army Sgt. Major (Retired) Michael J. Eason and a hair-raising rendition of “Taps” performed by Darren Piper. They, along with others on the program, reminded a large crowd gathered on the front lawn of the Murfreesboro Municipal Building that the price of freedom was paid in blood.

“Across our nation we gather to pay our respects today to those who gave their lives in defense of freedom,” said Sgt. Major Eason, a Potecasi native who went on as an adult to serve nearly 42 years in the U.S. Army, including two tours of duty overseas where he commanded 300 soldiers while conducting over 250 combat patrol missions during his 18 months in some of Iraq’s most violent areas. 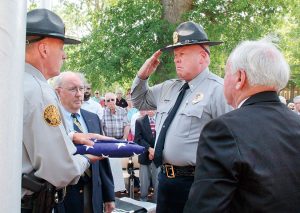 “We have lost brave men and women in all wars, including today in Iraq and Afghanistan,” he continued. “Wars are not without heroes, but they bring a high toll in the loss of loved ones. Our nation is richly populated in our cemeteries, both large and small, where our veterans lay. We are living today, and we need to thank our war dead for our freedom.”

Eason noted that over the course of centuries, more than 1.2 million Americans have perished as the result of military conflicts.

“Because of them we are able to live in a free society, one that our enemies envy,” he stressed. “Those brave men and women who died in battle, as well as those who survived and came home, made a major impact on our lives. They are our real heroes; they are the ones that made this country great.”

Sgt. Major Eason reminded those assembled of the true meaning of Memorial Day.

“It’s not about the beginning of the summer or a holiday from work; it’s not about the barbeques….it’s a solemn day of remembrance that should be set aside to recall the brave and selfless acts to complete a mission,” he noted. “We owe our existence today as a free nation to those soldiers, sailors, airmen and Marines, to include those today who are still engaged in battle and fighting for our freedom.

“It’s my sincere wish that those heroic defenders whose lives were tragically cut short be cherished, remembered and appreciated by a country they protected,” Eason added. “Our memories should never lapse over the sacrifices they made. Thank you to all gathered today for taking the time to remember those willing to sacrifice their lives so we can lay down our heads at night and sleep peacefully.”

“Today is a day of remembrance; we’re here to pay honor and respect to those patriots who gave their lives, sacrificed themselves in defense of our freedom,” said Murfreesboro Mayor John Hinton who welcomed the crowd. “May they rest in peace, and may we never become complacent, but instead never taking our freedom for granted and resolve to defend our freedom at all costs. That is for those who paid the ultimate price so they will have not died in vain.”

Mayor Hinton asked those military veterans present from World War II, the Korean War, the Vietnam War, the Gulf War, the War for Iraqi Freedom, and the Afghanistan War to stand and be honored.

Murfreesboro Police Chief Darrell Rowe and MPD Lt. Joe Burgess performed the task of lowering the ceremonial flag. Military veterans from of Murfreesboro raised the traditional colors as well as placed a wreath at the base of the town’s Veterans Memorial.

Afterwards, the crowd moved across the street to the Murfree Center where a large exhibit of World War II artifacts were on display. Many of the items were part of a personal collection of local military veterans.

AHOSKIE – It’s a place where education meets education. On May 23, the presidents of Shaw University and Roanoke-Chowan Community... read more