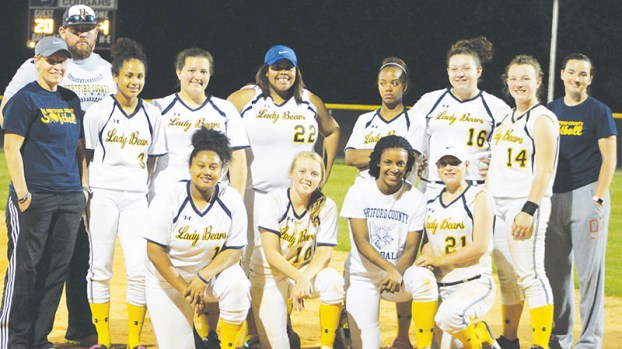 The Lady Bears topped Farmville Central in the first game 8-4, but fell to SW Edgecombe 20-4 in the championship game.

“We didn’t expect to beat that team for sure but we were so happy with how well we played the last couple of days,” said Bears head coach Ashley Collins. “That was a really good team and typically they make the playoffs most every year, but second place is really good out of four.”

After surrendering a pair of runs in the first inning, Hertford County got one run back in the top of the second when Emily Merritt led off with a walk, stole second base, and moved to third on a fielder’s choice by Karen New. Merritt then scored on a second fielder’s choice by Sara Lassiter. 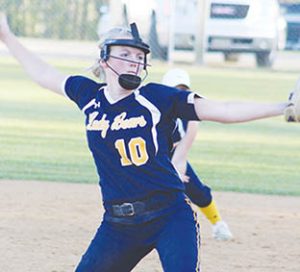 Emily Merritt pitches in Game One of the SW Edgecombe Softball Classic last week in Pinetops. The Lady Bears finished second, winning 8-4 over Farmville Central before falling to the host Cougars 20-4. Merritt and teammates Karen New and Jessica Weaver were named to the All-Tournament team.

After Farmville added a run in the bottom of the fourth, Hertford County added to their total when Merritt tripled and scored on Karen New’s base hit, leaving the Bears trailing, 3-2.

The Lady Jags scored another in the bottom of the fifth for a 4-2 lead before the Bears struck back and took the lead. Merritt led off with a base hit, stole second, and scored on a double by New. A single by Jazmine Bunch scored New and later a single by Brooke Brown scored Bunch to make it 5-4, Hertford County.

The Bears locked up the win in the seventh when Jessica Weaver and Watford singled and a walk by Merritt loaded the bases. All three scored off a double by Bunch. Merritt gave up a hit in the bottom of the frame, but no runs to wrap up the four-run win.

In Game-2, Hertford County fell behind 4-0 in the first and never caught up. They came close in the second when Merritt and New hit back-to-back singles and Sarah Lassiter blasted a three-run home run. Down 6-3 in the fourth, the Bears’ final run came when Bunch scored on a fielder’s choice. The Lady Cougars posted 14 more runs the rest of the way to win big, 20-4.