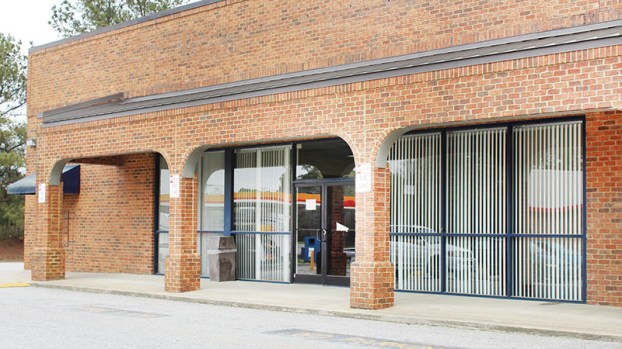 WINDSOR – Closed since the flooding damage of Hurricane Matthew back in October 2016, Lawrence Memorial Library has been looking for a home.

The proposed temporary location would be in the former State Employees Credit Union offices, part of the Food Lion Shopping Center at Windsor Square, located off King Street and the US 13-17 Bypass.

This same location served as a temporary location for the Windsor Post Office when it was closed due to storm damage.

Windsor Square, LLC of Greenville owns the shopping center complex and they are currently negotiating with the county on a 36-month lease agreement that’s expected to be mediated sometime in the next week.

At their April monthly meeting the Bertie County Board of Commissioners were updated by Bertie County Manager Scott Sauer, who said attorneys were reviewing the agreement.

“The documents have been shared with the management company and we’re hopeful of hearing something back (soon),” Sauer said. “As we work out the details they are excited to have us as a tenant.”

Sauer said a large sign would be erected at the site to alert county residents of the library’s new location.

Bertie County owned the former locale at 203 East Dundee Street – not the periodical and book inventory – but the physical location.

For years, staffers and members of the Albemarle Regional Library System (ARLS), for whom Lawrence is a part, have pushed for a re-location.

Following the latest flood damage, representatives of Care Master Restoration Services reported to the Commissioners in November 2016 that besides the anchored shelving used for book storage, the floor sustained significant damage which would require tearing out of the existing floor and the sub-flooring underneath. They further reported that despite the company’s best drying efforts, the facility was still in need of a good, final cleaning.  Later, at the same meeting, Betty Massey with the ARLS asked if the Commissioners would assist in finding a temporary location for continuity of services such as computer use, a limited selection of books, and checking out of periodicals. She stated that the goal and priority of the Library was to continue service as soon as possible, but also shared that the Library’s Board of Trustees was also interested in a new, permanent home, ideally outside of the flood plain.

Ideas of permanent locations were discussed, including a classroom at Bertie’s Martin Community College Campus on West Granville Street, the old cafeteria at the Board of Education’s Central Services Complex at the old Bertie High School, and even an underutilized classroom at Heritage Collegiate Leadership Academy on County Farm Road. The suggestion was also made by representatives from ARLS to link the Lawrence Library with another county or state office in need of new office space which might increase the library’s chances of additional grant funding.

ARLS Board members, who also appeared at the November meeting, said that after five floods in 19 years, a permanent relocation was the most desirable option.  Also discussed was the possibility of a joint effort relocating the library and the Bertie County Cooperative Extension Service – whose offices were also heavily damaged during the 2016 storms – at the Department of Social Services complex where the county already owns 15 acres of land.

System members had told the Commissioners their greatest concern was the lack of public library services locally, the re-deployment of staff to other regional facilities, and the continued expenditure of utilities for a vacant facility to prevent further moisture related damage.

When Jennifer Patterson, the new Albemarle Regional Library Director, introduced herself to the Commissioners at their February meeting in Merry Hill, she assured them that the ARLS was diligently working to secure a new location for the Lawrence Library outside of the flood zone.

Later in March, the idea of the shopping center location was broached, and after a tour of the facility by the Commissioners before their March 20 meeting – which ended with favorable approval – discussion began and continues to proceed.

WINDSOR – Progress has begun here between the Bertie County Courthouse and the County Office Building with the pouring of... read more