The win was Lawrence’s 12th of the season against no defeats and their eighth in Tarheel Independent Conference play – all five-inning affairs.

The Warriors grabbed an early lead with a pair of runs in the top of the first inning. Austin Wynne walked, stole second base, and went to third when Miller Trowell reached on an error. After Trowell stole second to get both runners in scoring position, Jarrett Harrell delivered a single to left field that scored both runners. The Knights failed to answer in their half of the inning, making it 2-0 Lawrence after one. 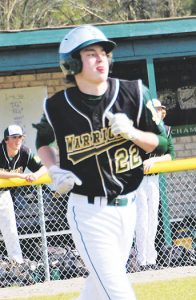 Lawrence Academy’s Nixon Rascoe jogs to first base after drawing a walk in a recent game. Rascoe had a hit as the Warriors blanked Terra Ceia on Friday, 10-0. | Photo by Annie Wilson

Two more Warrior runs were plated in the third when Wynne singled, went to third on Miller Trowell’s double, and scored on Harrell’s sacrifice fly. Trowell would later score on an error for a 4-0 Lawrence lead.

The visitors put it away in the fourth with six big runs thanks to a bases-loaded walk issued to Wynne scored Wood Trowell. Miller Trowell plated two more with his second double of the game, and the final two runs scored on back-to-back Terra Ceia errors.

Terra Ceia’s lone bright spot was a single by Austin Roscoe in the second inning. It turned out to be the only hit of the game.

In the bottom of the fifth, Harrell came on in relief and induced a fly-ball out from Brandon Cox to finish off the game.

Wood Trowell earned the win going three and two-thirds innings, surrendering no runs, a hit, striking out eight, and walking one. Two relievers helped close out the victory: Slade Cowan pitched a scoreless one-third of an inning and Harrell threw one inning.

Roscoe took the loss for Terra Ceia Christian. He pitched three and a third innings, surrendering seven runs on six hits, with a walk and three strike outs. He also had the Knight’s lone hit in one at bat.

Lawrence had eight hits in the game. Wynne and both Trowells were 2-for-3 while Harrell and Nixon Rascoe got the other Warrior hits. Both Trowell brothers had two doubles each and Harrell drove in three Lawrence runs. The Warriors were sure-handed in the field and didn’t commit a single error. Harrell made the most plays with nine.

Lawrence hosted the return game with Terra Ceia Monday in a contest that ended after press-time. They’ll visit Pasquotank tomorrow (Wednesday) before taking a week off for Easter break.