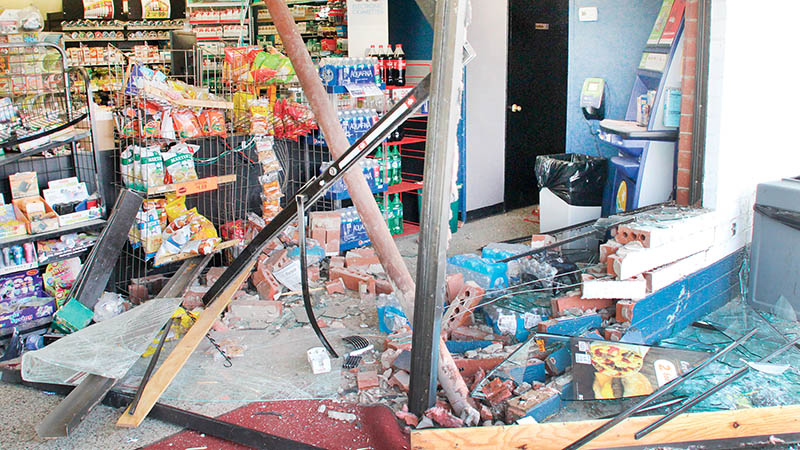 The front portion (above) of Duck Thru #12 on Academy Street in Ahoskie was heavily damaged when a 1996 Buick Century (below), operated by Gail Jacqueline Goddard, slammed into the business on Monday morning. | Staff Photos by Cal Bryant

AHOSKIE – An Ahoskie woman stands charged following an accident here Monday morning that plowed through the front portion of the Duck Thru convenience store, located on Academy Street.

A customer was injured in the accident.

Ahoskie Police Chief Troy Fitzhugh said Gail Jacqueline Goddard was the driver of the vehicle that caused the damage. She was charged with careless and reckless driving.

“It appears after viewing the surveillance camera at the store that the vehicle was in the process of leaving the gas pumps and heading towards the main entrance of the store,” Fitzhugh said. “The video shows that vehicle never came to a stop, continuing across the curb and crashing into the front right window and door of the business.”

At the same moment, a female customer was entering the door and was struck by the vehicle. 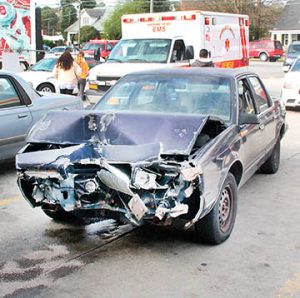 Fitzhugh did not release the name of the victim. He did say that she was transported by Hertford County EMS to Vidant Roanoke-Chowan Hospital where she was still being treated for non-life threatening injuries Monday afternoon.

None of the store employees were injured, Fitzhugh said. Goddard also escaped injury.

Damage estimates to the store were unavailable as of late Monday afternoon.