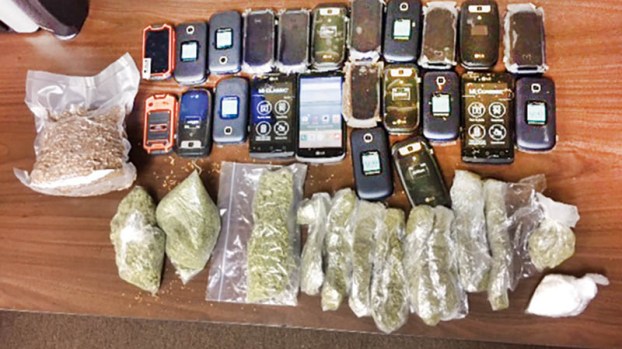 Marijuana, Xanax pills, bags of tobacco, and cell phones were discovered inside three volleyballs that are apparently used to smuggle illegal contraband onto the grounds of Bertie Correctional Institute. | Photo by Windsor Police Department

WINDSOR – Two men are under arrest and a third is being sought after officers with the Windsor Police Department, in response to several incidents involving the transportation and delivery of drugs and cellphones, began a surveillance operation at Bertie Correctional Institute.

The suspects were taken before Magistrate Davis who placed each under a $100,00 cash bond. The two men made their initial appearance yesterday (Wednesday) in Bertie County District Court.

On Saturday, March 11 at approximately 10:45 am, Lane said three males were seen on a path leading to the prison grounds, located off Cooper Hill Road (NC 308). One of the young men was carrying a volleyball.

As the officers were speaking with the men, the trio took off running on foot. Lane said Officer Wiggins was able to secure one suspect immediately. Meanwhile, Officer Leggett gave pursuit of the young man who was in possession of the volleyball. Leggett was able to corner that suspect in the yard of a residence on Cooper Hill Road, and upon the arrival of Windsor Police Cpl. Frank Ratzlaff and Detective Eddie Hoggard, the suspect was taken into custody. A search incident to his arrest resulted in a baggie of white powder believed to be cocaine being recovered from this suspect.

The third man involved managed to escape and is still being sought by the Windsor Police.

Following the arrests of the two men, Officer Leggett contacted officials at Bertie Correctional Institute and had them check the property for contraband. Prison officials advised they located two volleyballs on the property. A search of those two volleyballs plus one in possession of one of the suspects at the time of his arrest resulted in the recovery of 8.9 ounces of marijuana, 80 Xanax pills, three bags of tobacco, and 23 cell phones.

Lane noted that the investigation continues into this case, to include how the suspects were to be paid for delivering the illegal contraband to the prison grounds.

“I can’t speak highly enough about the actions of the officers of Windsor Police Department. Several of the officers involved were off duty but responded to the scene to assist with the arrest and the investigation,” Lane stated. “Officer Leggett and Officer Wiggins did excellent job of containing the situation until additional officers could arrive.

“These arrests are the direct result of cooperation between the administration of Bertie Correctional Institute and the Windsor Police Department. Department of Corrections Coastal Region Director Annie Harvey and Dave Millis of Bertie Correctional Institute have been instrumental in these investigations. This is great example of how agencies can achieve a common goal when they work together for the betterment of the community,” Lane added.

WINDSOR – The Roanoke/Cashie River Center (RCRC) has been named as one of 41 science centers across the state to... read more