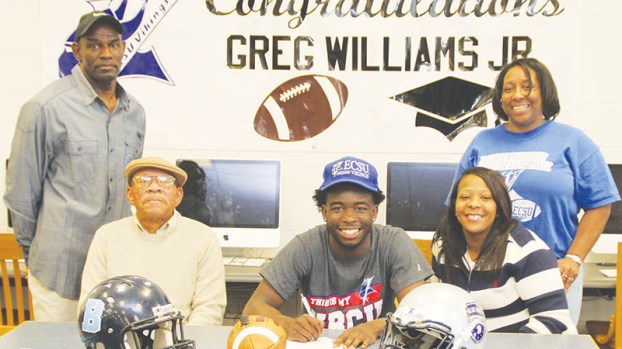 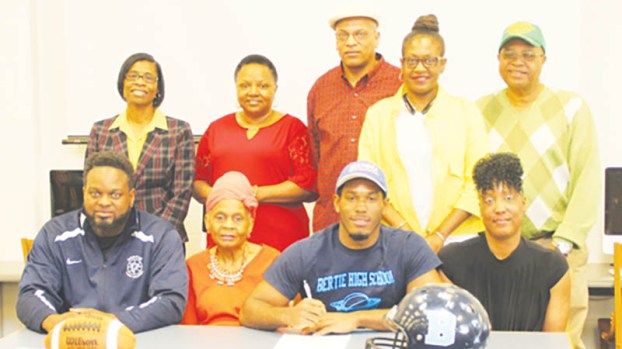 WINDSOR – They called their signings, “a steal”.

Williams was prime signal-caller for the Falcons in 2016. The 5’ 9”, 160-pounder played in just two games his junior year before leaving because he’d lost his lust for the game. That esprit d’corps was recaptured with the return of his former middle school coach, Grantley Mizelle, as head coach of the Falcons. Once back in tandem, the coach and quarterback led the Falcons to a 5-7 record and a post-season berth. Still, because of his stature, Williams didn’t attract the college offers he felt he was deserving of.

“I think I can play with the best of them,” Williams confidently maintains. “Even my future coach (ECSU’s Earnest Wilson – 2016 CIAA “Coach of the Year”) said I was a D-I AA player that managed to fall off a lot of radars because of my size. But I don’t look at it as a downfall or downgrade, I just want to play football and make those other schools pay that passed up on me.”

Last season Williams passed for 451 yards and rushed for 638. Those quick hands and feet accounted for eight Falcon touchdowns. He also caught one touchdown pass on a fake for 36 receiving yards in a dozen high school games.

“At the beginning of the season schools like Campbell, Wingate, UNC-Charlotte, Elon, and even ODU were talking to me,” Williams said. “I think they just didn’t offer me because of my size.”

Williams put a lot of doubters to rest when he took his first trip to California back in December as a selectee for the Blue-Gray High School All-American Bowl at Oakland-Alameda County Coliseum in the Golden State, home field of the Oakland Raiders.

“He was one of the first kids when I got the job who came up and spoke to me,” said Mizelle. “He was a back-up quarterback, 5’ 2” soaking wet, but his speed and his stats speak for themselves. But I think what really sells him over the edge are his academics and his character. He’s a 3.6 (grade point average) kid, so you have to respect the brains as well as the brawn.”

Mizelle feels his former young charge will make the best of this opportunity despite any perceived obstacles.

“I just look at his size as just another obstacle he had to overcome,” the coach stated. “When you’re that small a lot of folks don’t look at you, but Elizabeth City’s been with Greg the whole way and at the end of the day he’s close enough where I can watch him play, his family and friends can watch him play – and best of all: he’s happy. He’s going to college for all the right reasons; foremost, he knows when he gets out, he’ll have a quality education.”

Williams says he hasn’t decided on a field of study for college just yet, but he has shown interest in either business or criminal justice.

Cherry, on the other hand, tore his anterior cruciate ligament (ACL) on his birthday – the first day the 2016 Falcons team put on pads. He never played a down his senior year. Still, he never let the frustration define his love of the game.

“I still went to every practice, every game, every day,” he acknowledged. “I was just ready to get back out there on the field. Even though I wasn’t able to be out there I wanted my teammates to know that I was with them.”

Cherry entered what he’d hoped would be a successful final fall campaign getting looks and drawing attention from the likes of Duke and NC State of the Atlantic Coast Conference, along with NC Wesleyan, Old Dominion, and Randolph-Macon.

“I may be coming in as a question,” he warns, “but I intend to be a statement. I want them to know that I want a spot on the field; and since I didn’t play this year, I’m hungry.”

Cherry hopes to major in kinesiology: the study of the mechanics of anatomy and human muscles. Fitting, perhaps, in light of what he went through with his rehabilitation.

“When I graduate I want to be a physical therapist,” he notes proudly.

A 1,000 yard rusher (1,069, to be exact) who ran for nine touchdowns his sophomore and junior years, Cherry averaged over 97 yards per game in 2015. He also played on defense with a couple of sacks and was also a returner on the school’s kicking team.

“He has really worked his butt off to get where he’s at,” says Mizelle. “He’s got the grades with a 3.5 GPA, runs a 4.6 40 (-yard dash) and bench presses 300 pounds. We might have been talking about him going somewhere else if he doesn’t go down with that knee, but everything works out for a reason.”

Both former players say they will close out their senior year of athletics on the track-and-field team.

“They’re probably two of the best we have,” concluded Mizelle. “I’m proud of the way they represent our school.”