MERRY HILL – The new Executive Director of the Mid-East Regional Housing Authority (MERHA) would like to see more rental housing in Bertie County.  The county’s leadership would like to know if there are opportunities for public-private partnerships. 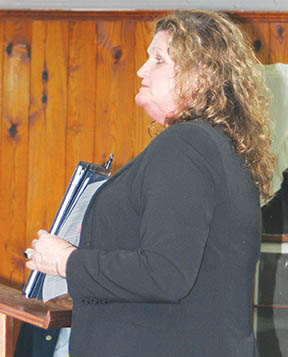 Lynn Alligood, Executive Director of the Mid-East Regional Housing Authority, addresses the Bertie County Board of Commissioners at their monthly meeting in Merry Hill. | Staff Photo by Gene Motley

“The challenge there is with rural areas,” Alligood stated. “The state’s financial housing agencies want to go to more suburban areas where there has to be (Food Lion).  They don’t want smaller (grocery) stores.  They want doctor’s offices nearby, and it’s really challenging because rural areas don’t get the funding like your more populous areas.”

Alligood said despite that challenge, her agency has done it before: in Roper (Washington County) in 1998 with a tax credit application – the organization’s first.

Commissioner Ronald “Ron” Wesson inquired about middle-income housing and whether MERHA managed only properties that it owns, or other developments.

“If the county was building a middle-income housing project would you guys manage property for others that’s not your own,” Wesson asked.

Alligood said the Authority currently do not offer that, but did not rule it out at a future date.

“That’s not to say we can’t,” she answered. “Especially if it’s for the community, when you’re trying to provide housing to bring teachers in.”

Wesson mentioned the State Employees Credit Union Foundation’s interest free loan program for the construction of an apartment complex that would provide a safe and affordable housing option for new and current teachers, and serve as a great recruitment incentive for the school system.

“It’s allowing us to build some middle-income housing for teachers, law enforcement, county and state employees,” he said. “We have a real nice piece of property we’re looking at and they would build it for us at zero-percent interest, but the key is the management.  That’s one of the hurdles, and while we’re in the discussion stage right now, it’s a real possibility.”

“And that’s where the private-public partnerships I was talking about come from,” added Commission chairman John Trent.

Alligood said its possible MERHA could manage such a property because it would be a service for the community; but she did say she would have to first approach the subject with her MERHA Board of Directors.

“It’s something we would love to take part in if something like that could be worked out,” she replied.

Trent asked Alligood to take the idea back to her Board and see if they would be interested in such an idea.

“Find out whether or not you would want to reach out and start managing outside properties that would be functionally owned by the county,” Trent acknowledged. “Please start researching that for us, because that’s how we’re going to attract this top talent that’s coming out of colleges and bring them here to Bertie County as teachers, law enforcement, corrections officers, and other young professionals.”

Trent estimated that about 60 percent of the housing in Bertie County is rental and noted that there is a constant housing shortage.

“This whole Board (of Commissioners) has discussed this,” Trent said. “A lot of the reason we don’t get good people coming back to Bertie County is because we don’t have the housing.  Our biggest obstacle is figuring out how we’re going to manage this.”

Alligood said MERHA has very strict guidelines and regulations for their property management.

“Our tax-credit properties are IRS (Internal Revenue Service) regulated,” she stated. “You have to have your I’s dotted and T’s crossed, but we have a great staff with a wealth of experience, so we would love the opportunity.”

Alligood mentioned some programs were in a state of flux due to the Authority’s split with the Washington (NC) Housing Authority nearly two years ago.  However, she did say her agency has interest in reviving the Individual Development Accounts (IDAs) program: one of the most promising tools that enable low-wealth families to save, build assets, and enter the financial mainstream. The IDA program is based on the idea of all-access for everyone through the tax code or through direct expenditures, to the same structures that subsidize homeownership and retirement savings of wealthier families.

The Director pledged to ask the MERHA Board to consider the Commissioners’ request and that she would report back to them at a later date.