WINDSOR – After stumbling at home against First Flight in what was an historic basketball game, Hertford County wasn’t about to let history happen a second time by blowing the conference lead.

The Bears took care of business thanks to 23 points from senior guard Jaquarii Roberson and completely overwhelmed rival, Bertie, 68-48, in the regular-season finale here Friday night.

Roberson led four Bears players in double-figures, while Eric Speight – the lone senior on Bertie’s team – closed out his home court career with a 22 point effort for the Falcons. 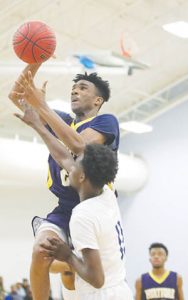 “This was a great win over our rival,” said Bears coach Charles Simmons. “I’m proud of the team for winning the conference championship; but now we have to get ready for the conference tournament and the state playoffs.”

The Bears opened the game on a 9-2 run thanks to seven points from Roberson. They then closed it out with a 6-0 run to stake them to a 15-6 lead after the first quarter.

After Zion Riddick banked in a jump shot to open the second quarter, Bertie went on a 7-0 run to get within four points at 17-13.  But the Bears just answered back with a 9-0 run of their own and doubled up the home team, 26-13.  After a Quatravis Riddick lay-up, the Bears closed out the half with a 9-2 run and headed into halftime with a 35-17 edge.

The Bears opened the third quarter with an 8-2 margin that staked them to a 43-19 bulge.  But back came the Falcons with an eight-point run of their own to trim the Bear lead to 43-26.  Roberson was fouled on a lay-up and made one-of-two free throws.  The Falcons refused to yield and put up seven straight points that cut it to eleven, 44-33.  But Riddick and Talik Totten quieted the crowd with a pair of lay-ups and the Bears were comfortably ahead and carried a 13 point lead into the final frame.

Foul trouble then began to plague Bertie as the fourth started and the Bears cashed in at the foul line.  After Bertie cut it to an 11-point deficit 50-39, Roberson drained a pair of free throws and then he wowed the crowd with a long-range three-pointer.   His final two foul shots gave his team a 20-point lead 66-46, and 20 points down was how it ended for the Falcons as the Bears closed it big on the road.

Hertford County (16-7; 11-1, NCC) gets a first-round bye before facing the Currituck-Bertie winner (the Falcons won a three-way coin flip for fifth place) on Wednesday night at home in the semi-finals.  Bertie (4-20; 3-9, NCC) faced Currituck on the road Monday in the first round.