JACKSON – May God bless and keep you always; may your wishes all come true; you’ve always done for others, now let others do for you; may you build a ladder to the stars and climb on every rung; may you stay forever young.

Those words, penned in 1973 by the legendary Bob Dylan, were repeated in song here Friday where a highly respected veteran in local law enforcement formally retired after a 51-year career.

Vickie Branch sang that song – “Forever Young” – for her uncle, Eddie “Jack” Buffaloe Sr., just a small part of a three-hour tribute to the now retired Northampton County Sheriff’s Deputy and Courtroom Bailiff who also spent eight years of his career as Chief of the Rich Square Police Department.

Judging by the sheer number of the men and women in law enforcement uniform, current and retired, that attended the retirement ceremony held inside the Northampton County Cultural & Wellness Center, the respect, admiration and love they have in their heart for Buffaloe speaks volumes for the impact this veteran officer had on their lives.

With his wife of 58 years, Ruth, seated at his side, the couple listened while co-workers, friends and peers of Buffaloe praised his long years of public service.

“It’s truly a blessing when a person can work in any profession for 20 years; when he obtains 30 years he’s fortunate; when he makes 50 it’s a miracle,” said current Northampton Sheriff Jack Smith who presided over the function. “We’d like to thank Chief Buffaloe, who is a dear friend to many of us, me included, for being able to work 51 years in one profession; that is a truly remarkable feat. Thank-you Chief Buffaloe for staying forever young.” 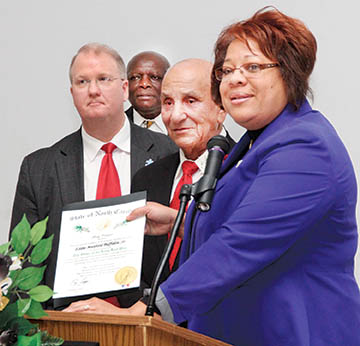 Later in the ceremony, Sheriff Smith presented Buffaloe with his service revolver and a huge plaque in honor of his half-century-plus of dedicated service.

Among those wishing Buffaloe a happy retirement was the Honorable Cy Grant, Senior Resident Superior Court Judge for District 6.

“It is an honor to extend my sincerest gratitude to you for 51 years of outstanding and dedicated service to the citizens of Northampton County,” said Judge Grant, reading from a letter he presented to the retiree. “Your service always exemplified integrity, high ideals and an unimpeachable character. You were one of the best.”

On a personal note, Judge Grant thanked Buffaloe for the professionalism and maintaining order in the Northampton County courtroom when Grant presided over cases.

Retired local District Attorney David Beard stressed that Buffaloe was able to “walk with kings and walk with pheasants and never miss a beat.”

“You always had a twinkle in your eye and you knew how to talk to folks,” Beard remarked. “Anytime you greeted people you did so with a smile. Knowing you has been my honor.”

During his time as the local DA and working cases inside the Northampton courtroom, Beard said watching Buffaloe work with the jurors was a special sight.

“You made them feel at home; you would hear laughter during their breaks all because of Mr. Buffaloe,” Beard added. “It got to the point where when a long, grueling trial had ended, the jurors didn’t want to leave; they wanted to stay with their new friend, Mr. Buffaloe.”

He presented Buffaloe with a gift and also invited him on a fishing trip this spring.

“I’ll be right there,” said Buffaloe as the crowd erupted in laughter.

Retired Northampton Sheriff John Wood said he had known Buffaloe since his hire date as a Northampton Deputy (Sept. 1, 1965).

“From the time he went to work, first for Sheriff John Outland, then for Sheriff Bob Corey, then Sheriff Ellis Squire, then my eight years as Sheriff, then Sheriff Wardie Vincent and now for Sheriff Jack Smith, you’ve been through it all,” Wood stated. “To have worked for six different Sheriffs is truly an accomplishment.

“Eddie Buffaloe Sr. is a genuine peace officer of the highest caliber, and a credit to law enforcement,” Wood continued. “He has the ability to calm a volatile situation, but if necessary to take the appropriate action otherwise. I cherish the fond memories of his great work.”

Garysburg Police Chief Raymond Vaughan presented Buffaloe with a plaque of appreciation on behalf of Lodge 47 of the Fraternal Order of Police.

“I worked with a lot of great people in my career, and Eddie Buffaloe Sr. was one of those individuals,” she noted. “He deserves all these things being said about him and I wish you a happy retirement.”

“Jack Buffaloe is a great friend and neighbor,” said Cumbo. “He has done so much for me and my family over the years, willingly and without complaint. He is a jack of all trades and a master of many.”

“This is a fantastic tribute to a fantastic man,” said Holloman, a Jackson native now living in Greensboro. “Mr. Buffaloe is a super guy. He does a great job for our company and the residents of our retirement community in Rich Square love him. His integrity is outstanding.”

Another retired Northampton Sheriff, Wardie Vincent, told a story of how Buffaloe influenced his decision to become a law enforcement officer.

“When I was younger, I remember him riding by in his deputy’s car and I thought that had to be the best job in the world,” Vincent said. “He looked after the citizens of our county. He’s an outstanding guy. He didn’t try to run a race to beat everyone else; he didn’t try to outmaneuver everyone….what he did do was try to work with everyone.”

“Mr. Buffaloe is such a sweet man,” Asbell stressed. “This is a man of all trades. I thought he was perfect as he was, and then I attended an event at a church in Gaston years ago where he sang ‘I Am Redeemed’ and the hair rose up on the back of my neck. God has given him so many gifts.”

Noting that she was married to a law enforcement officer, Asbell said she understands how Buffaloe’s wife and children had to make sacrifices when their loved one had to to leave in a moment’s notice.

“I’m glad you can now spend more time with your family,” said Asbell, who also presented Buffaloe with a plaque of appreciation for his long career.

NC House of Representatives member Michael Wray and State Senator Erica Smith-Ingram, both of Northampton County, joined to present Buffaloe with the state’s highest honor, The Order of the Longleaf Pine.

“Ever since I was a little boy I’ve respected Mr. Buffaloe; he always had a smile on his face, and he was and still is a true gentleman,” said Wray.

“We love public servants like Mr. Jack,” remarked Smith-Ingram. “He loves people; he loves the Lord. Every person who has ever had contact with him has been treated with dignity, with courtesy, with Godly love, and with professionalism. He did that every day for 51 years.”

United States Marshal Scotty Parker, formerly the Assistant Commander of the Roanoke-Chowan Drug Task Force, recalled the advice that Buffaloe shared with him back in 1989.

“We were getting ready to conduct a drug round-up and you told all those gung-ho young officers to remember to treat everyone that you arrest just like you want to be treated,” said Parker. “You taught us how to respect everyone. Because of you, Northampton County, North Carolina and our nation is a safer placed to live.”

He presented Buffaloe with a U.S. Marshal’s Service blanket.

Donna Gurwell, representing U.S. Congressman G.K Butterfield, presented Mr. and Mrs. Buffaloe with remarks he made on the floor of the U.S. House on Feb. 1 in regards to the long public service of Eddie Manford Buffaloe Sr.

Speaking on behalf of the family was Eddie Buffaloe Jr., the Chief of the Elizabeth City Police Department. He noted that his two brothers, Anthony and Deon, also followed in their father’s footsteps, now members of the Department of Corrections and the Department of Homeland Security.

“God gave us a great dad,” said Eddie Jr. “He taught us how to treat people. He’s been my role model for life.

“Dad, it was cold there in your shadow, to never have sunlight on your face, as we always walked a step behind,” the son added. “We were the ones with all the glory while you were the one with all the strength. Did you ever know, Pops, that you are our hero. You are the wind beneath our wings.”

He presented his father with a plaque entitled “The Badge” – saying it covers a lawman’s heart and represents peace, honor and dignity….it never sleeps; shows no prejudice; has no fear of danger; and represents an enormous burden.

In his remarks, the honoree, to a standing ovation, thanked all those who came out to wish him a great retirement.

“I wish my arms were wide enough to touch each of you in here and hug you all,” said Buffaloe. “It hasn’t been an easy 51 years; there’ve been some hard times. As I enter this retirement era, I look forward to continue to serve my family and friends.

“If I’ve touched someone’s life along the line, I give praise to the Lord for letting our paths cross. Thank you all for your love and your friendship,” he concluded.

The event concluded with Buffaloe singing two spirituals, joined on the last one by his family.

Also taking part in the retirement ceremony were his long-time friend and co-worker, Sheriff’s Lt. Barbara Hawkins, and prayer from Elder Raymond Vaughan Jr. and Seaboard Mayor Geraldine Langford. Other than the voice of Vickie Branch, others providing musical tributes were Tyrone Ruffin, Tamir Faison, and Sophie Buffaloe, the sister of the honoree.

AHOSKIE – As Roanoke-Chowan Community College celebrates its 50 years of service and all the hoopla surrounding that milestone, it... read more