AHOSKIE – Brandon Warren, a former Hertford County High School standout athlete, is battling cancer and a fundraiser has been planned to help assist with his medical bills.

A plate sale catered by Abrams Restaurant is slated for 11 a.m.-5:30 p.m., Friday, Feb. 17 in the Med-Ex Medical Transport parking lot at 902 E. Memorial Drive in Ahoskie. Cost will be $8 per plate, which will include barbecue, fried chicken, boiled potatoes, hushpuppies and coleslaw. Baked goods will also be sold at Med-Ex the day of the event. Deliveries will be made to areas with the sale of 10 or more plates. 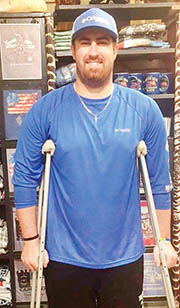 Warren, a native of Murfreesboro, was diagnosed with cancer in his foot last summer, which resulted in a partial amputation of his left leg in the fall. After the operation, doctors believed he was cancer free. However, during a recent medical visit where Warren thought he would receive clearance to return to his job in Florida, doctors found cancer in his lungs. He is now undergoing an experimental treatment at Duke University.

Warren, 24, was a multi-sport athlete at Hertford County High School. A proud Hertford County Bear, he stood out on and off the athletic fields. An excellent student, outstanding kicker for the football team, and the only three-time Conference Player of the Year and three-time All State in baseball, Warren attended Barton College in Wilson and continued his career as a Bulldog. He graduated from Barton in May 2015.

Prior to this life-changing challenge, Warren spent his summers playing in the Coastal Plain League with the Asheboro Copperheads.

A Christian with family values, Warren began his professional career at the State Employees’ Credit Union-Ahoskie branch before moving to Florida last year. He is currently employed at Sun Coast Credit Union in Tampa, Florida.

“My family and I are facing major medical bills and a lot of travel back and forth to Duke for continued care,” Warren said. “We greatly appreciate the community coming together to support us during this time. We are so thankful to everyone participating in this fundraiser and making contributions. It shows me that people in our area care about my family and me and are willing to support us. Thank you in advance for your help! Every dollar is a true blessing and will help tremendously.”

A special account has been set up at all State Employees’ Credit Union branches throughout the state to receive monetary donations. If you are interested in making a donation, go to any branch and let personnel know that you would like to contribute to the Brandon M. Warren account.