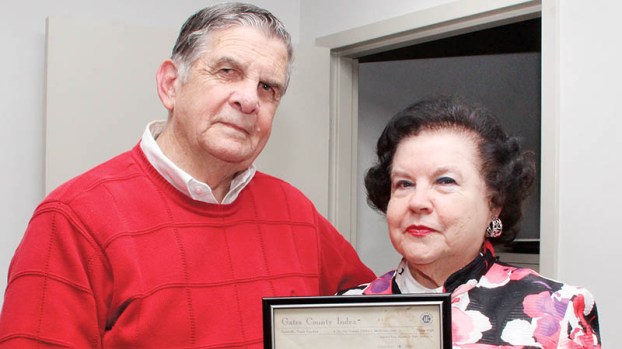 GATESVILLE – Even preserved under a glass frame, the paper is discolored, but the typed words still hold many fond memories for H.B. Lilley Jr.

“Dear Hollis,” the letter began. “Perhaps you know that I am not too good at speaking the things in my heart, but am much better at writing. And so I want to thank you in writing for your wonderful kindness to us.”

“Mr. Morris had had been sick and was in some tough financial straits that particular year,” said Lilley Jr. “That’s how my daddy was, he helped a lot of people but never took a lot of credit.”

In this case, Hollis Lilley Sr. had gone by the Index office, and Morris believed his guest was there to purchase some type of advertising for the newspaper since Lilley was a businessman.

“Instead, Mr. Hollis handed him an envelope containing some money to help see him through the tough time he was having at that time,” said Patricia Lilley, H.B. Jr.’s wife.

“You have made this one of the best Christmases we have ever had at our house,” Morris’s letter continued. “And your kindness started off a sort of chain reaction. We have received much fruit from Florida, money from a friend in Suffolk and a turkey from an anonymous donor. The whole thing leaves me still without an adequate vocabulary to express my deep thanks and appreciation.”

It appears in the letter that the newspaper editor was very much aware of Hollis Lilley’s big heart.

Morris referenced in his letter a newspaper story he authored about a young orphan wanting a wagon for Christmas.

“You (Hollis Lilley) were waiting at (my) office door the next morning with the biggest wagon I ever saw and how you went on to give those kids a big Christmas,” Morris wrote in his letter. “It just never occurred to me that I would ever be the recipient of your big heart.

“This whole thing has helped me mentally and physically,” the letter continued. “The doctor told me yesterday that I was greatly improved over my last visit. I told him that you and your kindness had done it.

“I still don’t know how to thank you enough. Thus on this Christmas Eve day, I can only beg God to bless you and if I can ever be of any help to you, I’ll count it as a privilege if you will allow me to do it,” the letter concluded.

“Mr. Hollis was a person who took care of everyone….he even would take care of cats all over the place,” said Mrs. Lilley.

Back at that time, Hollis Lilley had an office located behind the barbershop in downtown Gatesville. He operated various businesses, to include Gatesville’s first-ever dry cleaners as well as harness racing tracks at both Roduco and Eason’s Crossroads, but his main line of work was a timber buyer. He also among the owners of a lumber yard in Roduco and once owned two businesses in Suffolk – a furniture store and a used car lot.

“Daddy died in September of 1987 and I found that letter among his things….complete with the envelope with a 4-cent stamp,” said H.B. Jr. “I just thought it would be a good story to share about how Christmas is about giving and helping folks.”

AHOSKIE – What do members of a motorcycle club and law enforcement officers share in common? When it comes to... read more